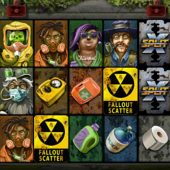 xWays Hoarder xSplit slot by Nolimit City has a gritty theme just like most of their latest games. San Quentin xWays slot was perhaps the most intense, but El Paso Gunfight xNudge slot and the less volatile Fire in the Hole xBomb slot were not far behind. He we have a post apocalyptic scene behind the reels, dramatic action music and survivor characters on the reels, mask-wearing and suffering from shortages of food etc. Now where have we seen this recently? So can we hoard a few wins for our bankroll here or will xWays mean no way for us?

On the reels...
You initially get 243-ways on xWays Hoarder xSplit slot over 5 reels of 3 rows but as usual with Nolimit City symbols can split into multiples of 2-4 on certain reels as we'll get to later. In this case, 259,920-ways is the maximum achievable. The high-paying symbols are Karen, Moonshine Michael, Gordon Geiger, Dr. Wayne and Terry Trash with pays from 5x down to 1.5x bet for 5-of-a-kinds and lower paying symbols are toilet roll, petrol can, Geiger counter, Med kit and Booze. There are 2 scatter symbols, Normal Fallout and Super Fallout scatter.

xSplits, Wilds & xWays
You can only see these on reels 3,4,5 in the base game and they will split all symbols into two on the reel to the left of where they land with a 2x multiplier if a symbol is split twice and 4x 3 times etc. It cannot split your Fallout scatters but will make them 'Super' scatters and if the bonus round isn't activated, any Supers get a random xWays symbol assigned. xSplit Wilds become normal Wilds and will split into 2 Wilds on reel 3, 3 Wilds on reel 4 and 4 Wilds on reel 5.
xWays symbols can drop in randomly on any spin and contain 2-4 regular symbols and if more than one appears they will always reveal the same symbol as we saw in San Quentin xWays slot.

Bunker Raid Bonus
You get 7 or 10 free games for 3 or 4 scatters which can contain a mixture of normal and Super Fallout scatters. You can buy the feature in some jurisdictions for 95x bet for the basic 3-scatters trigger, but can pay 777x bet for the rare 3 Super Fallout scatter trigger. Your enhancement is that any xWays symbols landing during the round will become sticky and fall to the bottom of the reel thus continually increasing your ways available, plus each awards +1 spin. Any further ones landing on the same reel will fall down too and merge with the other xWays symbols present.
Level Up - collect 3 sticky xWays symbols and your lowest object and survivor character disappear from the reels. Collect 6 and the second lowest of each type disappear. Collect 9 and the lowest 3 of each type will go. When triggering with 3 Super Fallout scatters you get a head start of missing characters and can end up quickly playing with just the top Survivor and object to be pretty sure of a big pay and a chance of hitting the highest pay capped at 11030x bet to earn the King of Waste animation!

Our View...
xWays Hoarder xSplit slot has a 96.14% RTP but also 96.38 and 96.68% for using the two bonus buy options if permitted. Nolimit City have been producing superb artwork, graphics, themes, animations and sounds for their slots consistently and this is no different. The issue is, we've now seen the formula too many times so there's no particular reason to play this over any other NLC games to be honest. Slots aren't cheap to develop with new mechanics so we see this quite often, like with all Yggdrasil's 'Splitz' and 'Gold' series games and I won't even mention Megaways! You do get good gameplay, exciting features here with high potential but in reality it's another 'lottery' slot, designed to produce a few well-publicised bonus round wins in the thousands times stake range and paying little regard to the low-stakes player who has little chance of achieving them. I'm not sure that I will be adding this one to my hoard of choice games...