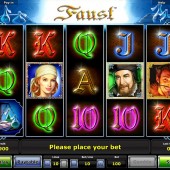 Novomatic have taken another one of their popular land-based slots and recreated it for playing online. This time it is Faust, a popular story about a successful scholar who becomes more and more dissatisfied with his life. This leads him to make a pact with the devil, choosing to exchange his soul for unlimited pleasures. With the help of the devil Faust manages to seduce a beautiful young lady called Gretchin, whose life is ultimately destroyed. The story has become the theme for numerous books, musicals, theatrical plays, films and of course a slot machine.

Mephisto is your friend

In the early tales of Faust the devil was commonly referred to as Mephisto and he can be found on all reels in this slot game. His pointy chin, long thin mustache and wide grin make him a very obvious deviant. However, as a symbol, this character can unlock many of these games biggest rewards.  It substitutes for all symbols except the special expanding symbol in the free spins feature. It is also the symbol for triggering the bonus game, which I will come onto shortly. Despite his appearance Mephisto is very much your friend.

A bonus game to get excited about

Like many other Novomatic slots, such as the super-popular Book of Ra Deluxe and the shogun-themed Katana slot, you may burn through a lot of your bankroll before triggering the bonus. However, if you do manage to land 3 or more Mephisto symbols in any position then you will trigger 10 free spins and could be in for some very big wins. Before the bonus starts you will be awarded a special symbol, which can be any symbol on the reels apart from Mephisto. This chosen symbol will be Wild and will expand to all positions on the reel it appears on, provided 3 or more your special symbol appear in a single spin. It is not uncommon for all 5 reels to become Wild! The ringing bell will let you know if you hit a big win. Normally your special symbol is the 10 or Jack, but occasionally it might be Gretchen or Faust himself – then you can be in for some very big wins.

As a regular on Novomatic slots like Lucky Lady’s Charm and Mystic Secrets, I am a big fan of slots like Faust. It’s exciting, volatile and very pleasing to look at. However, it is not going to appeal to a more casual player, looking for more interaction and shorter waits between wins. If you prefer this type of slot then you should consider some of the IGT slots like Lucky Larry’s Lobstermania 2 or Samba de Fruitas.