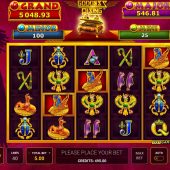 Goddess Rising slot is another Redline production for Novomatic the same as Tidal Riches and Gangster Paradise. Here we have an Egyptian theme pretty similar in sounds and symbols to that of the older Novomatic classic Pharaoh's Ring. We get some soothing Egyptian music and drum rolls when wins occur but aside from those the normal Novo trotting sounds prevail as we spin over a red background featuring an ancient procession. This Goddess may be rising, but will our bankroll too?

.
There are 40 paying lines here on Goddess Rising slot for which we pay 50 coins to play. The symbols are stacked if card values, single if not on this 5-reels and 4-rows game. The 5-of-a-kind pays are 200x bet for all 5 scatters, then 8x Horus, 6x Dog, 4x Ra, 3x Scarab, 2x Feathers or Tassel with four card values all paying 1.4x for a full line. The Goddess Wild will expand on reels 2,3 or 4 where it can land. When it does, coins are added to the 4 network progressives displayed above the reels. If the jackpot game is randomly triggered on any spin, you get 12 tiles to pick and when you reveal 3 of the same colour, you get the appropriate Mini, Minor, Major or Grand Progressive.

So if you land 3 or more Golden Sun God scatters, you are awarded 12 free games. These can be retriggered too. You get the lowest picture symbol, the Purple Feathers, super-stacked on all reels. Whenever an Expanding Wild appears on any of the centre three reels this will upgrade to the next highest symbol, the Tassel, which then becomes the super-stacked icon plus one extra spin is awarded. You can then upgrade to the Scarab and so-on and if you are fortunate you can get a maximum of 5 upgrades until the top icon Horus becomes the stacked symbol for the remaining spins.

Goddess Rising slot is cosmetically good and pretty average on sounds and animations. The volatility doesn't appear to be that high either despite the 95.00% RTP as the base game produces numerous small wins to keep you afloat. The free games are interesting enough although the potential is limited as even if you upgraded enough to get the top symbol super-stacked, a full screen would pay a rather paltry 320x bet. This won't attract the traditional Novomatic player who appreciates the big win potential of their games and for me too the low volatility kills the idea. I doubt I'll be making any further offerings to this particular Goddess...