One Hundred To One

One Hundred To One slot review 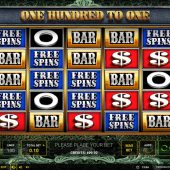 One Hundred To One slot from Novomatic is at last one of their creations as opposed to their in-house RedLine ones we've seen lately. These aren't terrible but the lower potential of the games including those Almighty Reels ones such as Garden of Persephone and Realm of Poseidon along with the Tales of Darkness duo including The Break of Dawn are not what players often expect from Novomatic. Here though we have a very basic looking slot with big reels set over a dollar banknote and the refreshing old trademark trotting sounds when the reels spin and stop alongside an unusual design as we'll see. So let's hope the game doesn't turn out to be a hundred down to one for our bankroll!

On The Reels...
Very unusually for the minimalist maths employed by Novomatic on most games, we get 100 pay lines here over 5 reels of 5 rows each. The 100 lines are all listed by the sides of the reels numerically, a bit like Microgaming's classic Cashapillar slot does. One Hundred To One slot therefore has stacked symbols and not many of them! It has the appearance of those Electrocoin Bar-X games with noughts where no symbols occur on the grid and you will only pay 10 coins to spin, but the pays are extremely low. You get 0.5x bet for 5-of-a-kind Bars, 0.3x bet for the $'s and the other coloured symbols are the blue stacked free spin ones. You only get those pays for 5OAK too as there are no 3 or 4-symbol pays here!

Free Spins
To get those shocking line pays up to anything credible, you need the free games. You again only get anything for 5OAK of them on a paying line, 1 spin per line, but of course being stacked you can get several spins. Now that sounds terrible in the context of what's gone before in this review, but their is some hope here. You begin with 1x multiplier on your initial spins and if you win extra spins, these are played at 2x but only after all the original triggering spins are used at 1x - don't be too generous Novomatic. So when you play the retrigger 2x spins, any further triggers are at then played at 3x. Spins won at 3x are played at 4x, spins won at 4x played at 5x and then any spins won during the 5x spins are played at 10x and so are any subsequent extra spins. Absolutely brilliant.

Our View...
I'm not sure what Novomatic were trying to achieve here with this nonsense. It's not a Bar-X but looks like one, it's not a credible 100-line slot either. The music during the free spins is awful and you may have guessed that the reels are different in them to ensure the pointlessly low starting amount of 1x spins are propagated to extend the round and at least keep the player awake. The RTP is 95.39% so no real relief there either and unless you get to 4 or 5x multiplier the total accrued can be shockingly poor. I did notice the 1x spin or spins are very generous with free spin icons but after that when at 2x or more there seems to be less on the reels. The game is terrible, completely pointless. The title is appropriate - One Hundred To One against me ever playing a cent through this again...