Spirits of the Valkyrie slot

Spirits of the Valkyrie slot review 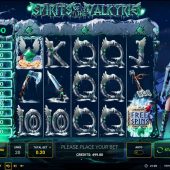 Spirits of the Valkyrie slot by Novomatic is a far more modern looking game than their usually quite basic designs with equally simple sounds and graphics. This is far more flashy as you'd more expect from other developers who have tackled this spectacular theme like Play'n Go with their Viking Runecraft, Netent's Vikings and of course the old Microgaming Classic Thunderstruck 2. The frosty reels are set outside in a winter landscape with a scantily dressed Valkyrie standing to the right somehow impervious to the cold here, maybe the dramatic and powerful classical soundtrack is warming her up - no wheedle and trotting noises here! Will this beautiful warrior be letting us leave with any of our bankroll though?

We are given 20 fixed pay lines on Spirits of the Valkyrie slot with symbols stacked on all of the 5 reels and 3 rows. You will notice an accumulator meter to the the left of the grid but we'll come to that later. We pay 20 coins a spin and the 5-of-a-kind awards are 25x or 500 coins for the Book Wild with a big drop to 25 coins Shield, 20 Hammer, 15 Axe, 10 Sword and five card values pay 8, 7 or 6 coins for a full line. There a few random modifiers though.

Colossal Magic - a 3x3 symbol will land in view.
Blade of Fury - a random amount of Wilds is added to the grid.
Ke Blade - one or more symbols on reel 5 will be slid across to reel 1, leaving full rows in their wake.
Shockwave Flash - you get extra symbols added to a winning combination to improve it.

On the left, your last 10 wins are logged on a meter with the the total at the top and this can include your yield from the last free spins bonus. To get this, you need the bonus trigger.

You must land 3 Winged scatters on reels 1, 3 and 5. The scatters on reels 1 and 3 are standard, but on reel 5 you will see either Free Spins for 10 free games that will pay both ways but cannot retrigger, or Win Stack which simply pays the meter total. The third possibility is to hit the Win Stack + Free Spins scatter which pays both. If this happens the free spins play first and total yield is added to the ladder before the ladder is paid.

It's a shame that Spirits of the Valkyrie slot looks very good, sounds even better but is let down by such a poor maths model which effectively gives us that dreaded low-variance 'egg-timer' effect on our bankroll. We get a decent 96.02% RTP to boot but if like most slot players you'd like to win something of note occasionally and aren't just spending money to watch animated sequences and have entertainment, then it's simply unplayable for a sustained session. The ladder feature is completely pointless as the last 10 wins will likely be pennies anyway and I'd rather see some better base game symbol pays. This Valkyrie will spirit away your money in no time I'm afraid...