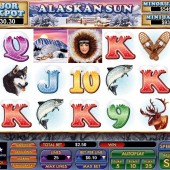 Online casino software developer NuWorks clearly had the notion that if it wasn’t broken then don’t try to fix it when it came to Alaskan Sun.

That is nothing against this 5 reel, 25 pay-line slot but it does feel like NuWorks have played it safe given how similar the game plays, looks and feels to other slots from the developer and it is a style that has also been present in the bank robbery themed Bank Bandit and the popular oriental slot Catmandu.

Alaskan Sun is packed with symbols associated with the Alaskan tundra. Snow, Eskimos, Igloos, Fish and even more snow ensures that you are in no doubt about the theme of this slot.

The game does have a couple of exciting bonus features that give it some individuality from other NuWorks titles. The Alaskan Sun Pick Bonus is triggered when you hit the Eskimo Girl Wild symbol anywhere on reels 2, 3 and 4 simultaneously. You then have to pick a number of Eskimos to reveal numbers between 1 and 10. The numbers are then added up and multiplied by a value of up to 1,000x the trigger bet.

There is also the free spins round which is triggered when you hit three or more Igloo scatter symbols across the reels. You will be awarded either 10, 15 or 20 free spins depending on whether you hit three, four or five scatter symbols across the reels respectively to trigger the free spins round. In this feature, every time the Eskimo Girl Wild symbol appears on a winning line, that pay out will be doubled.

Alaskan Sun has not changed the face of online slot gaming but it has gained a following due to the two main bonus features included in the game. The Alaskan Sun Pick Bonus is where real money could be won but it is very hard to trigger. The free spins round is slightly easier to trigger but obviously the win potential is slightly less. It is not a game that I, personally, would become obsessed with playing but it is certainly not a horrific slot game and the potential to win big through the bonus features is enough of a pull to lure players back time and time again.