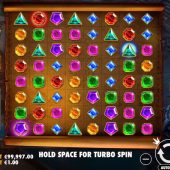 Gems Bonanza slot by Pragmatic Play is their version of those Play'n Go grid games such as Moon Princess, the popular Energoonz slot and Viking Runecraft slot. Here we simply have a temple background, zany music and gems on the grid for our winning clusters on the stone tiles. So can we get a diamond result for our bankroll here or will any bonanza simply be a pipe dream when entering this temple?

If a square is illuminated and this is uncovered by a winning cluster, it will award a modifier.
Blue Nuclear - after any wins are paid and the tumbles are over, a whole new grid will appear.
Pink Wild Gem - all instances of one random symbol turn Wild.
Orange Squares - random 2x2 symbols will be placed on the grid.
Red Colossal Symbol - a random 3x3, 4x4 or even 5x5 tile is placed on the grid.
Green Lucky Wilds - 5 to 15 random Wilds placed on the grid.

Gems Bonanza slot has a multi-thousand times bet potential and a good 96.55% RTP. The music and sounds are a bit annoying though and the base game pays very little unless you get a modifier or two in a sequence. The progressive feature can take a long time coming and then stitch you up with 10-30x quite often, although it can pay thousands if hitting it right - the game is rated as very volatile which explains the variance in feature returns. It's no better or worse than the Play'n Go efforts mentioned at the beginning here. You may see a bankroll bonanza, but probably not...