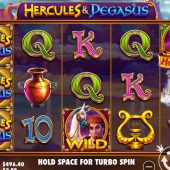 Hercules and Pegasus slot by Pragmatic Play takes us back to the world of ancient Greece like so many classic-themed slots in the past. Hercules by WMS was one which began life in land-based casinos before transitioning to online, Blueprint gave us the average Pegasus Rising with possibly the best example being the WMS original Zeus game. We don't get any drama-filled music here, more a modern synthetic sound with a blast of music when we win and a background of coastal hills behind the translucent reels. Will it be a Herculean task to add to our bankroll here?

We get 20 fixed pay lines over the standard 5x3 grid here on Hercules and Pegasus slot. Symbols are single except for the Logo which appears stacked and pays 20x bet for 5-of-a-kind, so there are signs here of the Blueprint 20-line typical set-up you find on games like Ted and The Goonies. The Wild Hercules and Pegasus pays 25x, Parthenon 15x, Harp or Vase 10x with five card values of either 5 or 2.5x for a full line. The bonus Gold Shield appears on reels 1 and 3 with Hercules and Pegasus scatters on 5 to trigger the bonus. First though, lets see the modifiers.

If 3 Scrolls appear over the grid, select one and get awarded one of these:
Hercules Wilds - randomly placed Wilds on the grid. This may retrigger too.
Pegasus Wilds - same as above but the wins may get a 2x multiplier
Bolts of Zeus - Zeus appears on the reels stacked and is a mystery symbol.
Bonus - guaranteed feature trigger.

Hercules and Pegasus slot simply has to have it's mechanic based on the Blueprint 20-liners and even the pays are similar plus the varying reel 5 scatter triggers. So there's not a lot new to see here on this medium-high volatility slot. The game looks and sounds OK if a little juvenile but the potential is limited despite the 96.50% RTP. The free spins can go on for a while but the line pays aren't great and the best one is obviously the combined feature. So not exactly a Greek Tragedy but hardly the stuff of legends...