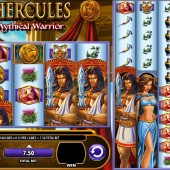 Hercules is one of the most iconic figures in classic mythology who is famed for is extraordinary strength and courage. It is the Roman term given for the Greek demi-God hero Heracles. He is so famous he's had movies, poems, and now, a slot game named after him.

On the Colossal Reels...

This 5 reel, 100 payline WMS Gaming slot has the Colossal Reels layout that will be familiar to fans of other WMS slots such as the hugely successful Spartacus – Gladiator of Rome and the rock 'n' roll-themed Kiss – Shout It Out Loud. For newbies to the Colossal Reels action, this is where the reels are set out in one main set of 5x4 reels and one Colossal Reels set of 5x12 reels. As you can imagine, this means there are a lot of symbols and potential winning combinations to be hit across the board.

Watch for Those Wilds!

The Wild is represented by the Hercules – Mythical Warrior logo and this symbol can substitute for all other symbols, except for the Bonus symbols, to complete any potential winning combinations present across the reels on any spin. The Wilds only appear on reels 1, 3, and 5 on both the main set of reels and the Colossal reels.

Win up to 20 Free Spins with a 20x Multiplier

Hercules – Mythical Warrior is a WMS slot at its most fundamental. Granted, it has the Colossal Reels to spice things up slightly but outside of that it has the Wilds, Bonus symbols, and free spins. In a way, that is what makes this slot feel so pure. It takes us back to that first slot we played online where we weren't too sure what we were doing and wanted to keep it simple. This slot does that. It won't ever become a flagship slot for WMS but it is worth a bit of game time to fill the quiet hours.