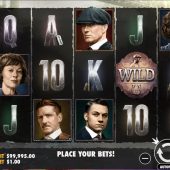 Peaky Blinders slot by Pragmatic Play is the first game to use the trademark of this hit TV series set between the wars in Birmingham and first screened in 2013.  The exploits of the Shelby crime family mean the characters are present on the reels and the background music is straight from the drama too, with the reels over a grim back street scene. TV-themed slots aren't that common, unlike film licenses, although Playtech made a few based on TV serials like The Six Million Dollar Man and we had Microgaming's diabolical I'm A Celebrity slot which later they somehow surpassed in its awfulness with Love Island slot. So will this game be a razor cut for our bankroll or shall it reach a new peak?

We get 20 pay lines over 5 reels of 3 rows and single symbols on Peaky Blinders slot. The 5-of-a-kinds are Tommy Shelby or Wild 20x bet, Arthur Shelby 15x, Polly Gray 7.5x, John Shelby 5x with five card values of 4 down to 2x. You have can get random modifiers and Game Logo scatters appear on the first and third reels with two different scatters possible on reel 5 to trigger one of two features available here.

Randomly on any spin you could get one of the two reel 5 bonus symbols landing without having the other 2 scatters on reels 1 and 3. You will get either:
Shelby Betting Shop - you get a money award allocated to every character symbol present on the grid after a spin with different reels in play, plus any other winning line awards that may have landed.
By Order of the Peaky Blinders - any winning lines on the screen are paid, then all Wilds and character symbols remain in place while the remaining positions spin. All Wild and character symbols will then transform into the same randomly-chosen symbol and winning lines are then paid.

Peaky Blinders slot begins with the usual Pragmatic Play decent 96.50% RTP and of course your experience is enhanced by soundbites from the actual TV show. The base game really isn't up to much without the reel 5 modifiers though. The free games do come in quite frequently and although Pragmatic tell us this is a medium-high variance game I'd say it's medium at best. The two bonus rounds cannot feasibly pay large wins and getting over 200x bet would be a rarity here, so really I would play this for the enjoyment of the theme rather than any potential. A reasonable game yes, a blinder most certainly no...