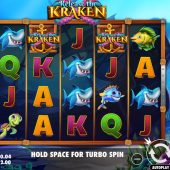 Release The Kraken slot by Pragmatic Play takes us into the underwater world of Nordic myth and legend usually reserved for those Swedish developers such as Play'n Go with their popular 3-reeler, Eye of The Kraken. Mind you, Amaya once produced the 20,000 Leagues slot based on Jules Verne's classic novel and we cannot forget Microgaming's 1024-way effort, the volatile Leagues of Fortune slot. So here we get spooky music infused with the sound of bubbles and rather belying this dramatic soundtrack, a cartoon undersea background with juvenile symbols. So will the long tentacles of the Kraken be dragging our bankroll under too?

We get 5 reels of 4 rows each and 20 pay lines on Release The Kraken slot with symbols single and double-stacked it appears. The Wild or Game Logo pay 25x as the best 5-of-a-kind win, then Shark 12.5x, Turtle 10x, Blue Fish 7.5x, Yellow Fish 5x with four card values at either 4 or 2x for a full line. scatters appear on reels 1 and 3 with 2 types appearing exclusively on reel 5 to tell us which bonus we can get. Before we get that far, we do have a few potentially good random modifiers to get through.

On any spin, a choice of 3 tentacles may appear. You will get either:
Kraken Locking Wilds - reels keep spinning and offering Chest choices which will either award More Wilds, Continue Spinning, All Wins 2x and Collect, More Wilds and Collect or simply the one you don't want, Collect.
Colossal Kraken Wilds - a giant 3x4 Wild is guaranteed to land on the reels.
Infectious Kraken Wilds - at least one will land and spread it's tentacles to make other symbols nearly Wild too.

Scatters on 1, 3 plus the relevant symbol on reel 5 awards:
Sunken Treasure Bonus - pick Chests to reveal cash prizes, continue until a Collect is hit.
Roaming Kraken Free Spins - trigger this and first you get prize Chests to pick which can award 1, 2 or 3 free spins. It ends when COLLECT is hit and you can get up to 12 maximum. Every Wild landing increases the multiplier for the rest of the round by 1x. You now get 40 pay lines plus the Wilds will be sticky and roam between each free spin, the multiplier is capped at 10x. No extra spins or retriggers.

Release The Kraken slot is good overall with the only disappointment being the juvenile symbols and appearance which as I said earlier, kind of contradicts the effects of the sinister mood music. You get a good RTP of 96.50% with reasonably frequent random Wild modifiers which can actually pay well in some instances. The bonus isn't too hard to land either but the pick-me is rather disappointing in comparison to the free games which can pay very well if fortune in in your favour. It may be worth releasing a few quid to feed this kraken...