Eye of the Kraken slot

Eye of the Kraken slot review 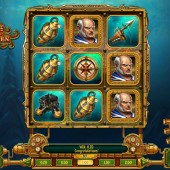 It is very rare that I play, let alone review, a 3 reel slot. However, when I received word that Playn’ Go where releasing a 3x3 slot called Eye of the Kraken, my intrigue was sparked. This unusual looking slot game is like nothing I have seen before with a haunting soundtrack, well designed reel symbols and a feeling of floating around in the bottom of the ocean at the mercy of the dreaded Kraken.

For those unfamiliar with a Kraken and its significance, don’t worry, you are not alone. According to ancient folklore, a Kraken is essentially a sea monster taking the shape of a giant squid or octopus. They were believed to stalk fisherman and sailors in the waters off Norway and Greenland, although witness accounts generally came from drunken nautical folk – which aren’t known for being the most reliable. However, this mythical creature makes the perfect theme for a slot game, especially when the team at Playn’ Go get their hands on it.

As previously mentioned Eye of the Kraken has 3 reels and 8 paylines. This is made up of 3 horizontal lines as you would expect, but also 3 vertical lines and an extra 2 horizontal lines. Think tick-tack-toe layout and you are probably getting the picture. The symbols spin independently of each other, which means you could end up with any combination of symbols landing on each spin. The whole reel layout is designed in a way to feel like a submersible craft as you move around in the depths – presumably trying to keep as far away from the Kraken as possible.

Random Wilds triggered by the Kraken

It turns out that the Kraken can also be something to benefit from, especially when it locks onto your vessel. The long reaching tentacles lock onto some of the positions on the reels, each one turning wild for a spin. The random nature of this feature means you could get visits from the Kraken several times in a short number of spins or you might not see it for a while.

The divers helmet symbol is the free spins scatter and you will need to see five of more at once to trigger the bonus. This will release 9 free spins and will add a couple of extra symbols to the reels. One of them is a treasure chest which pays out your bet for each one that appears. The other is the Eye of the Kraken, which will substitute for a wild when appearing in the bonus round.

There is one extra bonus in the game, which involves the torpedo symbol. By landing 50 torpedoes within a session of play you will trigger the Conquer the Kraken bonus. The torpedoes are presubably being fired at the Kraken getting it to release its vice-like-grip on the sunken treasure. This can be as much 500x your bet, although I have to take this information from the pay table as I haven’t achieved it myself yet.