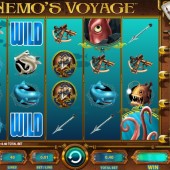 Captain Nemo, the enigmatic lead figure in the Jules Verne's classic sci-fi novel 20,000 Leagues Under the Sea from 1870, has often popped up in slots titles over the years. There is the 20,000 Leagues slot from Cryptologic and the same developer also released a slot simply called Captain Nemo.

Slots developers WMS Gaming are now up with their attempt to transfer the wonderful aquatic tale and its iconic character with this 5 reel, 40 payline slot release Nemo's Voyage. As it's WMS, you know you will be getting a slot that does not miss a trick. Interestingly, this was the first WMS slot to use the Phantom EFX engine that allows this slot to transfer to mobile and social platforms as well.

The reels are packed with aquatic-themed symbols such as a harpoon, map, nautical instrument, hammer head shark, blue whale, and an angel fish. There are also expanded symbols in the form of a giant squid attacking the Nautilus submarine and a man in an old fashioned aquatic suit. There are also a number of Wild symbols that can appear across the reels and substitute for all other symbols, except for the Bonus symbols, to complete winning combinations.

If you hit three or more of the Bonus symbols across the reels you will trigger the free spins bonus round. When this is triggered you will receive 8 free spins. During the free spins, you should keep an eye out for the giant squid. The giant squid will wrap its tentacles around random symbols, rip them off, and replace them with Persisting Wilds. These Wilds act as Sticky Wilds and remain in place for the remainder of the free spins.

Keep an Eye on the Depth Meter

I said you knew WMS would deliver a slot that does not miss a trick and that is immediately clear with the layout of the reels. Building on the 20,000 Leagues Under the Sea theme, to the right of the reels there is a Depth Meter with four different Wild levels listed down the meter. The meter marker is represented by a miniature symbol of the Nautilus vessel. This symbol will move down the Depth Meter after every spin. It will pass the four levels on the way.

The first level is the Multiplier Wilds level. This is where all the Wild symbols that appear on the reels will now have a 2x or 3x multiplier value attached to them. The next level is the Pressurised Wilds level. This is where all Wilds that appear will become Expanding Wilds and turn all symbols on that reel Wild. The next level on the Depth Meter is Clumped Wilds and this will be where the Wilds act as Stacked Wilds and these can appear on reels 2 to 5. Finally, the fourth level is the Wild Reels level and this does exactly what it says on the tin. Reels 1, 2, and 3 will turn completely Wild leaving you to spin reels 4 and 5 to complete winning combinations.

Watch Out for the Increase Pressure Symbol

Nemo's Voyage is a slot that makes the most of the 20,000 Leagues Under the Sea theme. The Depth Meter with the different Wild features is a stunning inclusion by WMS and the pressure gauge also ensures you're fighting an enemy within the game. I've played a couple Captain Nemo-themed slots but this is by far the most enjoyable. It is rare that you get a game that rewards you for your loyalty. The Depth Meter ensures that the longer you play, the more chance you have of triggering those Wild Reels.