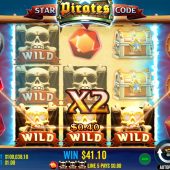 Star Pirates Code slot by Pragmatic Play is an extremely simple low-tech game which unlike say Starburst slot can actually pack a punch. Netent tried a more volatile version of that with Berryburst Max slot and Play'n Go came somewhere in the middle with Starblast slot. So we have an ocean background, jaunty music with pirate sound effects and treasures on the reels. Plain and simple. So can breaking the code mean riches for our bankroll here or will it really be a case of piracy for us?

On the reels...
We have 10 fixed pay lines over 5 reels of 3 rows here with both-way pays and stacked symbols on Star Pirates Code slot. The 5-of-a-kind pays are Chest 15x bet, Gold Coin 8x, Silver Coin 3x with four Gems of 2.4 down to 1.2x. Your other symbols is a Compass Wild and that provides our only feature if you will.

Wild Compass
This can land anywhere on the centre 3 reels in a 3x3 square. When it does, it will choose a direction and expand within the 3x3 area wherever the needle points. You then get a free re-spin with Wilds sticky and if another lands, the same happens again and so-on. The win is capped at 2,500x bet, presumably attained by adding Compass Wilds over several re-spins until the middle is all Wilds and you have Chests prominent on reels 1 and 5. These Wilds can also display a multiplier each time the Compass spreads out over an existing Wild which raises it by 1x and they multiply each other if both used in any winning lines.

Our View...
We get a good 96.70% RTP here and the game in appearance and sound is pretty basic so not a lot to say really in regard to that. The feature is quite entertaining when it comes in although there's no guarantee a Compass will actually create a win when it appears. When you see 3 or more land you usually get paid a reasonable win via the re-spins, especially with multipliers in play. One to stick on autoplay when your powers of concentration are at a low ebb..