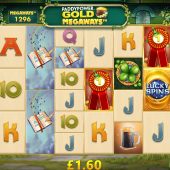 Paddy Power Gold Megaways slot by Red Tiger is the second use of the Big Time Gaming Megaways license on a casino-specific game. We have seen Leo Vegas Megaways already and unlike that slot, here we see the classic Bonanza formula with a few bespoke additions like Blueprint's Diamond Mine has. A wooded glade makes the background here and all the sterotyped Irish icons appear on the reels so you won't be surprised to know the music is a gentle fiddle-based Celtic type either. You do get an annoying Leprechaun it goes without saying, but more about him later - for now, will a visit to Paddy's Megaways power up our bankroll?

We get a grid of 6 reels on Paddy Power Gold Megaways slot which display 2 to 7 rows apiece therefore a maximum of 117,649 ways to win. You don't get a scrolling reel of 4 symbols above the middle reels though so your minimum ways are 64 as opposed to 324 on Bonanza. Scatters can appear on all reels and paying symbols are stacked and single. The best pay is for 6-of-a-kind Rosettes at 50x bet, then 7.5x for Shamrock, 2x for Notebook or Guinness and five card values of 1.8 down to 0.8x for a full way. You don't see Wilds unless the Leprechaun appears which we'll see shortly, but all winning symbols disappear for more to cascade down from above.

The Leprechaun can appear on the left and grant you 3 Mushrooms to choose from. You'll get one of three rewards.

Wild Stacks - up to 4 reels become Wild with 1 to 7x random multiplier on each. These are multiplicative of each other so some big hits can occur.
Random Wilds - up to 5 single Wild tiles placed on the grid.
Lucky Ways - a mystery symbol appears on at least the first 3 reels up to all 6 and reveals the same tile thus guaranteeing a win.

Jackpots - these aren't via the Leprechaun but you may see 3 jackpot symbols appear over the reels. You simply play a spin and can win a Cash Booster of 500x bet or more, a Daily Time Limited one of 900x bet or more or the Paddy Power Progressive which can be hundreds or thousands into the millions.

If you land 3 or more scatters you will get 10 free games with an increasing multiplier for every winning action. Each triggering scatter above 3 will add 5 spins and you can retrigger them too with 5 extra spins for 3 more scatters in the free games. Before you begin them, you pick a Mushroom for one of the three Leprechaun awards above and this will be far more frequent during the free games.

You cannot say Paddy Power Gold Megaways slot isn't entertaining because it is. You also have some big potential with Red Tiger stating 10,499x bet multiplier is the highest hit you can achieve here. The random features are not great unless you get a few Wild reels with good multipliers because then you could really hit pay dirt, otherwise the slot doesn't look or sound very good at all. The RTP is the worst of any Megaways game so far with a low 94.05% RTP and that includes the jackpots which you can only win playing 2.00 or more, with all stakes over 2.00 all going into the large Progressive. For that reason alone I would power off down the road in the opposite direction to this game...