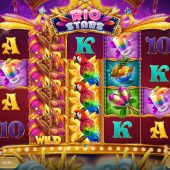 Rio Stars slot by Red Tiger brings us all the samba and colour of the Rio carnival which is alas a theme not often found on slots despite the graphical possibilities. The background is a night sky with fireworks and feathers surround the red reels with naturally some drumming and trumpeting synonymous with the scene. There have been a few games with a similar theme though like Thunderkick's Carnival Queen and for the old timers, Cryptologic's Samba Nights or for those familiar with land-based casinos, IGT's Samba de Frutas!. So will this carnival game keep our bankroll afloat? (groan)

We have 30 pay lines over a reel set of 5 with 4 rows each on Rio Stars slot with symbols stacked including the Samba Dancer Wild which is the top 5-of-a-kind win at 20x bet. The Parrot is 10x, Maracas 7.5x, Cocktail 5x, Fruit Bowl 4x with five card values paying 3x down to 1x. There is a scatter in the form of the Game Logo on the odd reels and it wouldn't be a Red Tiger slot without at least some modifiers.

At the start of any spin the reels may change colour as the drums appear from the edges and a beat is banged out which may peter out fast and nothing happens. If a final bang on the drums occurs with all the drumsticks at once, this signifies you'll be getting one of these four enhancements:
Carnival Reels - all card values removed for that spin and a guaranteed win.
Mega Wild - a colossal 3x3 Wild is added to the reels and can land on any 3 consecutive reels and should produce a significant win!
Rio Dancers - the costume feather fans float across the reels, some stopping and turning Wild where they land.
Rio Multiplier - a multiplier from 2 to 20x will be applied to your next win.

Scatters on 1, 3 and 5 will award you 6 or more free games, usually 8, 9 or 10. No retriggers possible but you will get the Carnival Drums appear on every spin, and in practice they tend to actually activate a modifier every other time. You can win up to 2,000x according to the splash screen.

Rio Stars slot is quite a good game in my opinion, with great music, vibrancy and colour alongside good graphics and animations. The random features occur regularly and can pay very well, especially the colossal Wild when on the first 3 or centre 3 reels. Free games are seldom disappointing and you should see all 4 randoms during them unless unlucky with a decent overall outcome. The RTP is 95.73% and tends not to let your balance go too far down with a medium volatility stated. I certainly enjoyed my time in Rio...