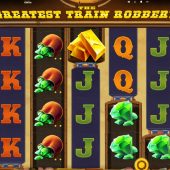 The Greatest Train Robbery slot by Red Tiger reverts back to their standard form of a feature slots with plenty of modifiers and things going on. The theme is pretty much cartoon based Western one with the reels represented by a bird's eye view of train carriages and of course the sound of steam and whistles when we spin and hit wins. Fans of this theme may have already experienced Netent's Wild Wild West or original Dead or Alive slot or my personal favourite Play'n Go's Cowboy Treasure, so will we end up here with the great bankroll robbery - or not?

We have the usual Red Tiger large grid of 5 reels and 4 rows which thay tend to use even for slots like this with only 20 fixed pay lines. The Greatest Train Robbery slot therefore charges us 20 coins to play and the 5-of-a-kinds are Wild 600, Sheriff Stars 400, Emeralds 280, Bag 160 with five card values of 72 down to 24 for a full line. You can see Gunsmoke scatters on the odd reels to and there are a few modifiers to view before the main event here.

Randomly you may see a cartoon bandit appear on either side or both sides of the reels. After a brief emptying of their revolvers and throwing dynamite in a lot of smoke, you'll see one of these three actions:

Respin - A dynamite explosion may cause a winning respin on two or more reels and you cannot get additional scatters during this.

Cloning Wilds - explosions may start a fire which spreads across the reels in random directions, turning symbols Wild and guaranteeing a win.

Mystery Symbols - the smoke may spread across the reels, covering two or more tiles which all reveal an identical symbol and guarantee a win.

You need the scatters on reels 1,3 and 5 to trigger these. Each scatter reveals a number of spins. If a Bandit appears he will stick about for the remainder of the spins throwing dynamite on occasions triggering one of the modifiers or adding some extra free spins. If you get plenty of modifiers then you can rack up a pretty good heist here!

The Greatest Train Robbery slot is pretty good and childish fun if you like cartoons and general mayhem while you play, with all that shooting and exploding to keep your bankroll more or less intact. The graphics are basic but the sounds and animations fit our Western theme very well and we do get a solid 96.03% RTP to boot. You won't leave this railroad with too much gold as it's not a hugely volatile game, being more about accumulating smaller to middling wins via the modifiers. That said, I think there are better trains to catch than this one, which offer more in the way of a first class journey...