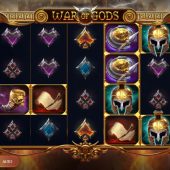 War of Gods slot by Red Tiger is one of those 'battle' games where the player takes the persona of one of two adversaries. Think Betsoft's Good Girl, Bad Girl slot and more recently Quickspin's Artemis vs Medusa and you get the picture. Microgaming did one too, the pretty lamentable Tiger vs Bear slot so let's hope this is a bit better. Here we get Zeus and Hades as the characters, a grim hellish background and doom-laden sound effects and classical music to provide the power to our soundtrack. So can our bankroll escape the wrath of these gods, or will it be condemned to the underworld forever?

On the reels...
There are 5 reels of 4 rows each, single and stacked symbols and a basic 30 pay lines on War of Gods slot. You can increase the lines to 45 or 60 in the 3 features we have here by adding two extra reels and up to 2 more rows so there are pays of 100x bet possible for 7-of-a-kinds but we will use the basic 5OAK pays which are: 20x bet Yellow Zeus, 16x Blue, 14x Purple, 12x Gold and also Hades, 10x Helmet, 8x Shield, 6x Horn, 4x Scroll and four card suits of 3.6 down to 2.4x. There are no Wilds so let's get onto the 3 exciting features we can trigger.

Re-spin Features
Wrath of Zeus - If you land 2 Zeus symbols on reels 1 and 5 you trigger this round. Zeus will grow to fill those reels and become sticky. He will start off on the lowest colour, Gold, and the centre 12 positions re-spin and can land sticky Wild symbols, crosses or blanks. These crosses will upgrade the Zeus symbol to the next one up each time they land and your round ends on the first spin where no symbol is added. You are then paid the Zeus lines according to which colour Zeus you ended up with.
Hades Hellfire - Same as above, but with Hades needed on reels 1 and 5. You now get a triangle which can land along with the Wilds. This will randomly upgrade with either an extra row or reel each time, to a maximum of 7 reels of 6 rows. The round finishes after a dead re-spin.
Warring Gods - Land a Zeus one side and a Hades the other. Then you get both the above features combined. Zeus and Hades now combine on the end reels and Zeus upgrades with crosses and the reels expand with triangles. Assuming 100x for the best 7OAK win, and a maximum of 60 lines, you could win 6,000x here.

Our View...
War of Gods slot is excellent in terms of graphics, sounds and animations with a 95.66% RTP. You won't win too big in the base game so are always relying on the features which can pay very well on occasion and are good to observe. You will find the best wins occur on the combined feature which can be hard to hit as it's a volatile game, but it rarely pays less than 50x and often over 200x bet, if you don't get the big one! I would certainly pay to do battle with this mighty pair again...