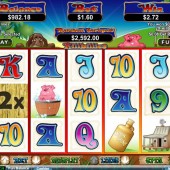 If you cast your mind back to the golden days of American TV around the year 50BTW (Before The Wire) one of the most popular shows was a black-and-white comedy centered around a family of poor-as-dirt farmers who hit it big and move out west to California.

Now, we’re not suggesting that developers consider slots players like the characters of The Beverly Hillbillies – poor one minute, rich the next – but the dreams of hitting it big permeate pretty much every slot ever made.

If you’ve ever been to Vegas you may have seen the Beverly Hillbillies slot that have provided some major payouts at the Venetian in recent times, but there’s certainly enough hillbilly action to be had on your friendly laptop, as demonstrated by slot developer RTG’s own take on the theme, the Hillbillies slot.

So, is this Beverly Hills much cop?

A 5 reel, 20 pay-line slot, Hillbillies comes with all the usual accoutrements, plus a maximum jackpot of 5,000 coins. However, as this is an RTG joint, of course, you could be in line for a big progressive jackpot. On the reels you’ll find classic characters straight out of Oklahoma, like the old farmer, a pretty farm girl and a handsome farm boy. Elsewhere there’s the family farmhouse, a bottle of moonshine for a sneaky tipple at the end of a hard day, and the usual 9-through-Ace symbols. Oh, and the farm animals haven’t been left behind – an array of the wacky creatures is here too.

It’s a family affair when it comes to Wilds, as all the members of our crazy crew act as Wild symbols. They substitute for every symbol, plus they act as the game’s scatter. The old farmer appears on the first reel, the cowgirl on reel 3 while the young farmhand takes on the fifth reel. Respectively they award a 2x, 2x and 5x multiplier when forming a winning combo so it pays to know who does what.

When working as the scatter, simply get two or more of them on the reels and you’ll be immediately awarded free spins. What’s more, your wins in those free spins will be doubled. But we’re not finished there. If the Wild hillbillies appear again during the free spins they’ll multiply your wins again. But wait – we’re still not finished! The feature can be re-triggered!

That’s about your lot for bonuses, but with a really exciting free spins feature and the chance to bag yourself plenty of multiplied wins, especially as the game’s betting starts at just $0.01, not forgetting RTG’s progressive jackpot to get your grubby hands on, Hillbillies could prove to be the slot that sends you all the way to sunny California. And if Hillbillies gets you in the mood for farm-related shenanigans, don’t forget to check out Sheriff Gaming’s 3D animal-obsessed slot, Fortune Farm - probably beating Hillbillies in the graphics stakes – or Rival Gaming’s take on the American Gold Rush, Gobblers’ Gold.