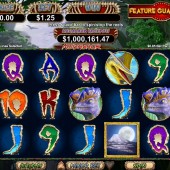 Megasaur is the long-awaited sequel slot from slot developer RTG to the slightly overrated T-Rex slot that was released a few years back. It has been seen as RTG's big rival release to the epic and highly-anticipated Jurassic Park slot from Microgaming.

This slot is a 5 reel, 25 pay-line slot and you know exactly what you're in for. Fans of T-Rex will be very familiar with the graphics and layout of the reels. In fact, this might as well be called T-Rex v1.5 because bar the name change and the odd dinosaur wardrobe change on the reels, you really could be forgiven for mistaking the two slots. Unfortunately, you can only bet a maximum of $1.25 per spin so don't expect to win a life-changing sum of money on this slot.

The volcano symbol represents the Scatters and they are also the key symbol when it comes to triggering the free spins bonus round. You will require to hit three or more of these symbols across the reels in order to earn between 6 and 50 free spins. It is also possible to earn additional free spins on this slot.

There is also a Win-Win feature. If you happen to be slightly lacking luck on the free spins and win less than 10x your bet during the free spins then this feature will kick in and give you the chance to win up to 250x your bet.

You Can Win the Megasaur Jackpot!

You will also be keen to hear that there is a progressive jackpot that can be won on this slot. It is creatively named the Megasaur Jackpot and at the time of me writing this review it had increased to over $1 million. If you fall short of winning the mega jackpot, there are also the minor and major jackpots that are 10% and 20% of the mega jackpot respectively.

Megasaur is a slot that a lot of people were excited about. I can kind of see why but I'm still not totally on board with RTG slots. When the 3D slot Orc vs Elf was released last year I was really excited about the direction RTG were taking their slots but it appears they've gone backwards. Megasaur does offer slots gaming on a budget with a tiny chance of winning a lot of money. It's not one of the most aesthetically pleasing slots out there but I think it will develop a cult following. It's not for me but that's not to say it won't be for everyone.