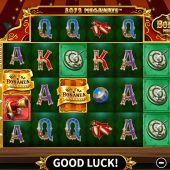 Big Top Bonanza Megaways slot by Skywind is their seventh MW game and they tend to improve as they go, with this possibly comparable to Alive! Megaways with the extra facets.  Here we have the big top at the circus as our theme with the requisite music tracks and sounds and the tent as our background alongside a few characters from the ring.  Nothing new there, Microgaming used this theme a lot once with their own Big Top slot and afterwards with Carnival Royale slot.  So can we avoid any clowning around with our bankroll here or will it not escape from the lion’s mouth?

On the reels…
There are 2-7 symbols on each of the 6 reels of Big Top Bonanza Megaways with a top scrolling row of 4 single symbols giving 324-200708 possible ways to win.  Master Wilds appear (unless modifiers!) only on the top scroll and game logo Ticket scatters can land on all six reels.  Our 6-of-a-kind pays aren’t high at all, the Car at 5x bet is best, Cannon 3x, Hat 2.5x, Knife Target 2x, Skittles or Ball 1.25x with four card values at 1 down to 0.5x.  You do get some good modifiers here though!

Free Spins
You’ll get 10, 13 or 16 for 4, 5 or 6 Ticket scatters respectively and 3, 6, 9 or 12 extra spins for 3, 4, 5 or 6 scatters during them.  There’s the familiar increasing multiplier of 1x during the round and any modifier awards a multiplier during them, it gets added to the multiplier in play.  You’ll also notice more modifier symbols land on the top scroll in the round.  The maximum pay is 100000 coins, or 5000x the 20-coin bet if you like.

Our View…
Big Top Bonanza Megaways has a 96.00% RTP and is nothing special as regards the graphics, animations and sound effects.  Any decent wins in the base game require modifiers due to the low symbol pays here and if you’re impatient for those 4 scatters, in some jurisdictions the bonus can be bought for 100x bet.  The free spins are very volatile and you will need the best top-row modifiers adding big multipliers into proceedings to have a chance of hitting near to the 5000x maximum win cap, which in itself is like Pragmatic Play’s disappointing 4 or 5000x caps.  A reasonable time can be had under this tent but the cannon here doesn’t have a stratospheric range…