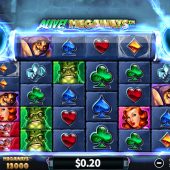 Alive! Megaways slot by Skywind is a themed trademark edition and packs a real punch as we shall discover. Having played it safe with their first two Megaways slots viz-a-viz Book of Gems Megaways (a Book of Ra type mechanic) and Big Buffalo Megaways (a Raging Rhino style game) they've hit the mark here at the third attempt! We have the mad professor and Frankenstein subject matter here alongside strange events you would expect to see from this laboratory background which may benefit us later. The graphics and animations are spectacular to boot and clearly some work has gone into the production of Alive! Megaways. WMS made Invaders Megaways which has a similar adult cartoon appearance to this although I think it will come a distinct second in the feature department as we shall find out shortly. So can our bankroll stay alive for long when we make a call to the professor or will it be consumed by the monster?

There are 6 reels each displaying 2-7 symbols plus a scroll of 4 single symbols in the top tube resulting in 108 to 200704-ways per spin of Alive! Megaways. Your pays are 10x for 6-of-a-kind Frankenstein who is the only character to pay for 2-of-a-kind, 2.5x Professor, 1.5x Lady, 1x Hunchback, 0.75x Bolts or Vials with four card suits at either 0.5 or 0.4x. Wilds in the form of Brains only appear in the tube at the top while scatters are represented by electrodes and can fall on all reels. You might occasionally see Spiders fall down the reels which may or may not signify a win, big win or Wilds due to appear, similarly when the Monster roars and the Electrodes either side of the tube spark up. Your only definite modifier is the Blank Screen tiles which may land and all reveal the same symbol from the standard pays. The bonus here is where the big fun begins!

Free Games
Land 3 Lightning scatters for 8 spins with +4 for each over the 3 required. If your jurisdiction allows, you can buy the feature for 100x bet and get 10 spins and in all jurisdictions you can opt to pay 25% more per spin for double the usual feature frequency. The enhancement is common i.e. a 1x increasing multiplier for each winning tumble but now the differences reveal themselves. Firstly, you now only get scatters on the Tube Reel above and only need 2 for +2 spins while 3 awards +4 and all 4 awards +8, no limits. Wild Brains still appear there and the Spider or Roar hints still occur too. You complete the spins, get your yield but it's not over yet - unless you want it to be!

Play it Your Way
So you now have a choice. You can bank your winnings, part of the winnings or risk them all for extra spins which carry on where your multiplier was at the conclusion of the first round. You see 5 test tubes with red and green portions, green being the win. The green area is bigger the more you risk and/or the less spins you go for. So for example after a 100x yield, to gamble for +1 spin on the left it would be 85% green, while maybe +9 spins on the right tube would be about 20% green. If you banked say 80 of that 100 yield and risked 20, those green areas would diminish considerably.
It's your choice and you get a maximum of 9 winning gambles at it, all the time measuring how much green you see by banking or not which you can do at any time. Get a red gamble, you lose and get paid nothing if you risked all your winnings or whatever you banked from the initial feature yield and afterwards. The banked amount is sacrosanct - once you bank, you cannot chance that money again i.e. reverse it. There is one final twist - after a losing gamble, the test tube you chose may randomly fill up green and reinstate the Play it Your Way mode!

Our View...
Alive! Megaways slot has a RTP of over 96% and refreshingly a brand new feature menu and mechanic to give the player some control over risk and volatility. The graphics are great, sound effects and animations superb so as I said in the introduction, this slot is a class different from Skywind's first two and alas quite mediocre Megaways games. The hint effects which may precede Wilds and good wins are popular with players, as we saw with the BTG 'slow spin' on games like Dragon Born Megaways.
The free spins are standard in and of themselves but the Play it Your Way options are a great idea in my view. You can punt a poor yield of say 20x bet on a high risk option to possibly get in effects a whole second chance feature of 5 or more spins or take part of a bigger win to 'tickle' your way +1 spin at a time to bigger winnings and any choice in between. You get frequent retriggers in the free games and a win cap of 10,000x stake which I'd suggest would be achieved almost certainly only by your decision-making in Play it Your Way. Give this game a go and your slotting experience may just well come alive for once...