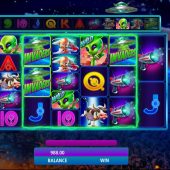 Invaders Megaways slot by WMS (or Scientific Games as their games are now categorized) is based on an old 25-liner of theirs, Invaders From The Planet Moolah slot. Nothing unusual there when we take into account their existing Megaways output which includes Battleship Direct Hit Megaways slot and the much-derided Montezuma Megaways slot, which goes to show some old themes can work well when transformed into this mechanic and in the case of the latter, some don't! Here we get an alien planet at night as our background with zany symbols and sound effects to play with and of course the infamous cow in the flying saucer makes an appearance. So will these invaders conquer our bankroll or can we win in this planetary challenge?

You will see 6 reels of 2-7 rows each thus Invaders Megaways slot has 64-117,649 ways to win. Symbols are stacked with winning tiles removed for new tumbles and don't pay much for 6-of-a-kinds as is common with WMS Megaways games. The Logo is 4x bet, Alien 2x, Professor 1.2x, Cow or Ray Gun 0.8x and six card values pay from 0.28 down to 0.2x for each full way. You will see a strip of all 11 symbols as just listed above the reels and during every spin the cow in the UFO selects one of them to be a Wild for that spin if appearing on the centre 4 reels anywhere. The final symbol is the Planet Bonus scatter appearing on all reels.

This can randomly appear during any spin in its spaceship and will cause all reels to have between 7 and 10 rows on them. The minimum amount of ways it will award is 168,070 and the maximum for all 6 reels having 10 rows is 1,000,000 ways!

We are awarded 7 free spins for 4 scatters, 10 for 5 and 15 for 6 or more appearing in any spin, with +4 spins for 3 scatters during them. You don't get the usual increasing multiplier here but instead one of the 5 premium picture symbols will be selected each spin to award its own specific modifier:
Logo - the top-paying symbol expands to fill the reel wherever it lands.
Professor - any win will get a 2x multiplier, doubling for each further tumble within that spin, capped at 256x.
Alien - each Alien symbol will increase the rows on its reel and the adjacent ones, same if more tumble in to maximum 1,000,000 ways.
Cow - all Cow symbols become 2x Wilds for the duration of the spin, they multiply each other.
Ray Gun - each one in view will add a randomly-placed Wild to the grid but any further ones tumbling in will not.

Invaders Megaways slot has a good 96.30% RTP and is actually a fairly decent Megaways. The zany theme is not childish but genuinely funny, the random Wild tile each spin is a nice touch for the base game. The low symbol pays are always a factor that raises eyebrows on WMS Megaways but as we saw with the recent 90,000-odd times stake win in the base game of Spartacus Megaways, these can be multiplied massively. The free games here are very imaginative and do have huge potential, we are told the wins are capped at 250,000 which at 10 maximum stake means the game could well be capable of over 25,000x bet. These alien invaders may not be as scary as the word suggests...