Invaders From the Planet Moolah slot 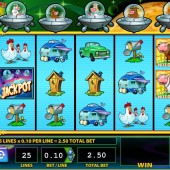 Why have a slot based on farm animals when you can have a slot based on farm animals and UFOs?! Yep, we're in hillbilly territory here, with a slot based around a troop of little green men beaming up an unsuspecting farmer's cows somewhere in the Midwest. This is not the first time aliens have invaded from extraterrestrial destinations. Microgaming's arcade-style Max Damage and the Alien Attack divided opinion and Money Mad Martians - Cosmic Cash by Barcrest also split slots players down the middle. So what about this alien effort from WMS Gaming?

This slot comes with Cascading Reels which is always good to see. On the 5 reels and 25 paylines we get chickens, milk, a mailbox, an outhouse, a barn, a trailer, a truck, and a family of hillbillies who pay out when mixed on the reels: a dog, grandpa, grandma, cowgirl and a vest-wearing man. Very sexy. The Jackpot UFOs symbol is the top payer when playing the top coin. The cows are Wild, and although they only appear on reels 2 to 5, they substitute for all symbols. They also appear stacked on the reels.

This slot utilises the Cascading Reels feature. You probably know the drill: whenever a winning combo appears on the reels, it disappears to allow the symbols above to drop into the place to form possible new combos. However, in a neat touch in keeping with the UFO theme, instead of exploding or disappearing, the winning symbols get 'zapped' by a UFO hovering above the reels. If you manage to form winning combos with the Wild cows, they get beamed up by the UFOs, allowing more symbols to drop down. The look on the hapless heffers' faces is priceless.

Earn up to 50 Free Spins

That's it for special bonus features, but look out for the free spins meter on the left-hand side. There are eight spots in it which fill up every time you hit a winning combo. Make it all the way up and you can bag 7-50 free spins. So there is the potential to trigger some decent pay outs with the free spins.

So, how does Invaders From the Planet Moolah fare against other sci-fi themed slots out there? To be fair, there are plenty around, and most have some kind of Men In Black-style comedy angle. If you like the tone of this game, check out Cryptologic's Area 21, full of garish alien colours, while Betsoft Gaming's alien-themed Out of this World is full of zany music and effects. The thing that saves Invaders From the Planet Moolah are the Cascading Reels feature, but other than that I can take it or leave it.