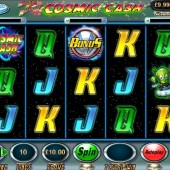 Already a hugely popular land-based slot, Barcrest’s Money Mad Martians: Cosmic Cash – which is full of martians....who are mad about money – comes to a laptop near you, offering the same fun-filled slots action from a developer who’ve been there, done it and snaffled the t-shirt.

With betting fixed at 10 pay-lines, the 5 reel slot means you’ll be wagering anything from $0.10 to $400 a spin – truly, this is a video slot fit for every pocket imaginable.

But it’s not just the betting range that will get you excited in this Barcrest slot; there are plenty of sweet bonuses too. It’s just as well, as the reels aren’t amazingly exciting – other than mad green Martians and regular poker symbols, there’s only the Cosmic Cash logo (earning you the top payout).

There’s no Wild, but there’s a neat randomly-awarded Shuffling Reels bonus that beams down on your reels at the end of a non-winning spin, making those duff losing reels into winners.

Win or Trigger the Asteroid Bonus

Look out for the Bonus scatter symbol as it triggers a nice little Pick 'Em Bonus feature when landing on reels 1, 3 and 5. Choose a symbol to win either a multiplier or another bonus symbol that triggers a sub-game, the Asteroid Bonus feature.

Here you are given the chance to choose three asteroids to reveal either a Martian or a multiplier. The Martian will reveal surrounding asteroids to find you more multipliers and increase your winnings.

Win 500x Your Stake in the Planet Bonus

There’s one more bonus feature hidden within the Asteroid Bonus game. Pick correctly during the game to activate the Planet Bonus. Essentially a glorified Pick ’Em Bonus game, you’ll be faced with three different planets which spin and stop in front of you to reward you with a different prize. Spin well and you get a planet that pays out a whopping prize of 500x your stake. The second best planet pays out anything from 250x down to 100x your bet, while the third planet pays out 80x for the top payout down to 50x your stake.

While Wild fans won’t find much here to engage them, fans of lucrative bonuses will. The RTP payout is high-ish at a shade over 95%, while the fixed betting lines and multi-layered features mean there are plenty of chances to cash big time.

For more sci-fi insanity, check out Sheriff Gaming’s fun robot-sitcom, The Robets - a great option for its attention to detail and features, while Microgaming’s space adventure slot, SpaceBotz, is worth a look, but features hounds will probably want to stick with Barcrest’s offering.