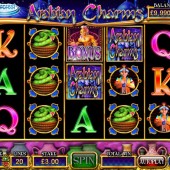 If 3D slot developer Sheriff Gaming's take on the classic Aladdin panto tale in the form of Alawin was the London West End production - all 3D animation, slick graphics and nice bonuses - fellow slot developer Barcrest's take on the same story is purely a past-its-prime gaff in downtown San Francisco.

OK, that may be a little unfair - on San Francisco - but with Barcrest's Arabian Charms you get a little taste of the Arabian Nights, even if the emphasis on a 'little'.

As with Sheriff's Middle-Eastern effort, Barcrest's slot is a 5 reel, 20 pay-line slot with betting starting at just $0.01. We get some Arabesque stylings on the classic 10-through-Ace symbols, plus there are a couple of characters from the story, namely the genie and an Aladdin-style figure. Elsewhere there is a snake and the Arabian Charms game logo. As for animation, we do get a nice firework display whenever you hit a win, but this slot isn't about slick animation.

As well as cute Arabesque 10-through-Ace card symbols, we get on the reels the snake, the genie, the Aladdin figure, and the Arabian Charms logo. Aladdin acts as the game's Wild, and he substitutes for all symbols other than the Scatter. Five Wilds pays a top payout of 250x your line bet.

Could You Win the Arabian Charms Mystery Win Bonus?

Every time you spin the reels of the Arabian Charms slot, you have a chance of triggering the Arabian Charms Mystery Win Bonus. When this happens at random, a winning set of symbols will appear if the previous spin didn't produce a win. Alternately, if the previous spin did produce a win, the Mystery Win bonus will add to that win! This can be really lucrative if the slot decides to make the winning combo consist of Wilds.

Look out for the Scattered Genie Bonus symbols. Simply get three of him on reels 2, 3 and 4 and you'll trigger the special game whereby a wheel of fortune will be spin, allowing your character to proceed along a path filled with multipliers. Keep spinning and winning until you hit the 'Collect' sign or you reach the end of the path. Potentially the bonus round is incredibly lucrative - a 500x line bet jackpot can be won - and more than makes up for the base game's relative stinginess.

If 3D hijinks are more your thing - and they're definitely mine - panto-themed Alawin will probably be more your thing. Barcrest don't do fancy, though, so I'll probably forgive them the lack of detail contained within this slot. If you like the simple things in life with some guaranteed solid gameplay from a trusted developer, then Barcrest's other slots are worth a look. Start with the multicolored paradise of Rainbow Riches.