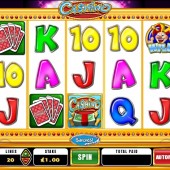 Cashino (spelt Ca$hino) is the 5 reel, 20 pay-line slot game developed by Barcrest that began life as a popular slot game in the land-based casinos. It has now made the successful transition to the online platform which is always a tough move to make for any game that has carved a reputation for itself on the casino floors.

Cashino has long been known as one of the most renowned slots in the world and its theme of playing on the luxurious world of the rich and famous only adds to its allure for players.

Symbols in the game include Dice, Cards, Cash Stacks, Jokers, Roulette Wheels and the regular playing card symbols of Ace, King, Queen, Jack and 10. It feels like you are playing a slot game that is a casino institution in itself. Cashino also includes a Wild symbol that substitutes for all other symbols except for the scatter symbols to complete winning combinations during regular game play.

Prizes and Multipliers to be Won in the Roulette Wheel Bonus

There are a number of exciting features that are the active proof of why this game has garnered such a positive reputation for itself. The Roulette Wheel feature is triggered when you hit three or more of the Roulette Wheel scatter symbols across the reels. You are then taken to a second screen that presents you with a roulette wheel that has segments offering prizes and multipliers. You will be awarded the prize or multiplier belonging to the segment of the roulette wheel that the ball lands on.

Pick Your Prize in the Cashino Cards Bonus

The Cashino Cards Bonus feature is another thrilling feature in Cashino. This is triggered when you hit three or more Cards scatter symbols across the reels. You must then choose one of the cards shown to reveal a prize.

Win 2x Your Stake in the Free Spins Bonus Round

Cashino is one of the legendary slot games that pre-exists the online slots era. It has been there, seen it and done it. You are looking at the Michael Jordan or Muhammad Ali of the slot world and once you have given the game a few spins it is easy to see why. Cashino is worth playing just so you can say you have played it and is in the same league as Barcrest’s other slot titles such as its enjoyable King of Aztecs slot and Irish themed Rainbow Riches.