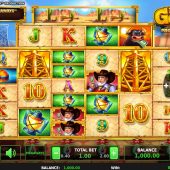 Black Gold Megaways slot by StakeLogic is a rare oil-themed game but could certainly yield some gold. We have some country music to listen to with an American desert oil field behind the reels and symbols to match. We have had the old classic by Nextgen, Oil Mania and Microgaming's not so good Rich Geyser and indeed Betsoft had a game also called Black Gold but they aren't licensed in Europe in many places. So can we hit gold or will it be a black day for our bankroll?

We have 6 reels of 2 to 7 rows each including the usual scrolling reel above the centre 4 columns on Black Gold Megaways slot and therefore 324-117,649 ways. There is actually another scrolling reel above the 4-tile one with random modifiers but we will see those soon. The symbols are stacked and single with winning tiles being replaced from above the reels. The 6-of-a-kind pays are Oil Tycoon 50x bet, Bull 7.5x, Hat 1.75x, Lamp 1.5x with six card values from 1.25 down to 0.75x for a full way. Dynamite Wilds can appear on the scrolling reel and gold Oil Derricks are the scatter here which appear on all reels.

There are 5 of these and the type you'll get is what lands on the top feature reel.

These are the usual on Black Gold Megaways slot with 12 for 4 gold Oil Derrick scatters and 5 extra spins for each above 4. You can get 5 or 10 extra spins by seeing 3 or 4 on the scrolling reel. Modifiers are more frequent and you get an increasing multiplier for each winning action.

Black Gold Megaways slot is one of the better Megaways editions with reasonable graphics and good sounds and animations, with the random modifiers quite cleverly done. The RTP is a decent enough 96.02% and those aforementioned modifiers can on occasion make good base game wins. The feature is pretty much the same as it always is on this maths model and mechanic with over 20,000x possible but very volatile overall. The sounds and symbols won't wear you down like some themes can do either. Give it a try and you may make a lucky strike here...