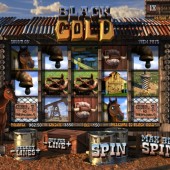 If you've ever stumbled across the gold-digging escapades of NetEnt's slot, Boom Brothers, you'll know that the treasure-hunting theme has legs in the slots world.

After all, what's more fun than following a bunch of jovial japesters on the hunt for treasure?

With Black Gold, slot developer Betsoft Gaming get out their trusty 3D animation software and have a go themselves, as you take the central role of an old oil digger in the early days of prospecting.

If You Liked Boom Brothers...

The good news is that, just as with Boom Brothers, Betsoft get it bang on, but when you've got top animation and gameplay - and a knack for producing classy 3D slots generally - it's really no surprise this game delivers.

A 5-reel, 30-payline slot, Black Gold has all the hallmarks of a Betsoft product: hallmarks that mainly consist of lots of funny symbols, some nice animated touches, and sexy bonus rounds.

Bill and his trusty steed are the main characters here, but elsewhere there are oil barrels, pipes filled with the black stuff, money, drills, and a 'No Trespassing' sign. Meanwhile, over the top we get some nice plinky-plonky country tune to accompany your play.

Re-Spins But No Wilds

Black Gold has no Wilds, but it more than makes up for it in its special features, starting with the center reel re-spins. Simply make a winning combo across the reels and reels 1, 2, 4 and 5 will freeze while the center reel is re-spun.

Hit a winning combo this way and the reel will spin once again, this time with a 2x multiplier added. Keep winning and you'll get more spins until you stop hitting winners, the multiplier increasing as you go. Betsoft, we forgive you for forgoing Wilds - this is much cooler.

As for bonus rounds, there are plenty on offer. Get three or more Barn scatters anywhere and you'll get the Nighttime Free Spins Mode, whereby the Barn acts as the Wild. Not only that, but the multiplier increases during the free spins, meaning you could be seeing some major wins.

Pick Your Prize in the Drilling for Oil Bonus

It wouldn't be a modern-day slot without some 'Click Me' action, of course. Luckily, Black Gold has such a round - Drilling for Oil. Get three or more Drill symbols across the reels and pick one to see what prize you win.

Play Higher or Lower to Win in the Oil Pump Bonus

Finally, look out for the Oil Pump symbols, as they trigger the game's big bonus round. Get three or more pump symbols on the reels and you'll play a simple 'Higher or Lower' guessing game, plumping for higher or lower on the next number shown on our old fella's oil pump. Guess correctly four times, or get four wrong answers, and your turn ends, sending you back to the main game.

For potentially lucrative spins, and a tonne of cute animation, you can't really go wrong with Black Gold. As well as NetEnt's offering I mentioned at the top of the review, make sure to check out another of Betsoft's 3D slot - the savannah-themed Safari Sam - if you enjoy similar animated hijinks.