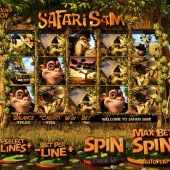 If you’ve ever sampled the delights of Microgaming’s jungle-themed slot, Mega Moolah and its slot developer sibling Big Kahuna, with their progressive jackpots and monkey business, then you’ll certainly warm to the 3D wonders of BetSoft Gaming’s Safari Sam.

And if you know the developer’s caveman-fest, 2 Million BC, you will definitely feel right at home.

African exploration is the name of the game in this slot. You’re greeted upon starting the game by a pretty tribal girl, and our native shares the reels with monkeys, safari 4x4s, tents, and a lion and zebra who look like they’ve been plucked straight out of animated movie, Madagascar. Our monocled glory hunter Sam completes the symbols.

Win 1,500 Coins with the Bilbao Trees

The Bilbao tree symbol is the game’s scatter. Three, four or five of these icons will award 450, 750 or 1,500 coins respectively, plus there's an entertaining animated sequence involving Sam and the native woman.

Another nice touch is that three identical symbols in a reel will make the stack collapse, and award you 25 coins to boot. Meanwhile, the game’s Wild symbol is a randomly-appearing 10x symbol that will multiply your winnings.

What About the Bonus Features?

You want bonuses? There’s a range of bonuses on offer in the game, kicking off with some free spins.

Freebies are awarded when the zebra, monkey and gorilla appear on the same pay-line. One of the animals – your choice – will act as a multiplying Wild.

4,500 Could be Yours in the Binocular Bonus

Keep an eye out – or should that be two – for the binoculars symbol, as the other bonus round is triggered when three of them appear on the reels.

Help Sam spot various animals in the bonus game through his binoculars and you’ll bag cash prizes. Stay eagle-eyed and 4,500 coins could be yours.