At The Copa slot

At The Copa slot review 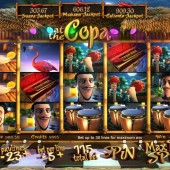 “At the Copa, Copacabana, the hottest spot north of Havana,” warbled generously-conked crooner, Barry Manilow in his ‘70s classic.

Well, the legendary New York gaff is now the setting for the hottest slot north of Havana, thanks to slots pioneers Betsoft Gaming. The club, built on the foundations of Mafia, molls and music, and which saw entertainers like Marvin Gaye, Sammy Davis, Jr. and Dean Martin sing there over the years, has a reputation which Betsoft have tried to live up to. But does it turn out to be a case of Goodfellas or Goodfellas pizzas?

Get Into the Samba Spirit

Famously, the Copa had Brazilian decor and Latin-themed orchestras, and this is where the 3D 5 reel, 30 pay-line slot gets its inspiration. Some nifty animation, courtesy of the industry-leading graphics team, puts you right in the heart of a salsa night at the club, as you shimmy with dancing girls and goatee’d Lotharios.

To remind you you’re there, there’s an unobtrusive salsa soundtrack over the top of the game, plus pink flamingos, bongos, trumpets, maracas and pina colada cocktails filling the reels.

There are some wacky bongo noises when the reels stop spinning, and when you win Carolina will shimmy across the reels for your pleasure.

Keep an Eye Out for Two Wilds!

There are two Wilds to look out for. The first is the Ocean View symbol which appears on reels 1, 2, 4 and 5. The Wild substitutes for all symbols, other than the progressive jackpot and Free Spins symbols. There is a second Wild that appears on reel 3 only – look out for it as it will expand on this reel.

The Wilds are all fine and dandy, but pay particular attention to the dance shoe symbols. Three or more of these appearing anywhere triggers the bonus feature.

You’ll be awarded 10 free spins to begin with and asked to pick a dance partner to join the lovely Carolina in front of the reels. Will it be the cheesy goatee’d Rico, or the, er, cheesy goatee’d Pedro – it’s your choice.

The couple will then dance away during every spin, whilst your chosen partner will turn into additional Wilds. These free spins also benefit from additional multipliers up to 10x per spin.

Three Jackpots Up for Grabs

If Betsoft haven’t spoiled you enough with their animation and bonuses, there’s the little matter of the progressive jackpot to consider. In fact, there isn’t one, but three jackpots to be won.

The chilli symbol triggers these on the reels, and you’ll need five of the hotties to win. Five chillies in any position wins the smallest ‘suave’ jackpot; five in any position on lines 2 and 3 bags you the ‘mediane’ jackpot, and five chillies on the first line sees you take down the biggest progressive jackpot, the ‘caliente’.

Betsoft are the master of 3D games, and with At The Copa they’ve triumphed yet again. If you’re a hardcore fan of quality animation that doesn’t look like it was put together on a Spectrum 48k (ask your Dad, kids) then you should love this. And if you’re after more 3D mayhem like this, check out Betsoft’s jungle-themed slot, Safari Sam, with its cute animations, or another of Betsoft’s nostalgic efforts, the film-themed At The Movies.