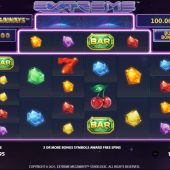 Extreme Megaways slot by StakeLogic has an interstellar look combined with retro symbols as many of the games do. See Pragmatic's Starz Megaways slot and combine the look of that with either of StakeLogic's Super Joker Megaways or the bigger Super Wild Megaways slot and you pretty much sum the game up. To that end, we get synth music and a funky appearance overall so an encouraging start. So can it be extreme gains for our bankroll here or extreme pain?

On the reels...
With a top scroll of 4 single tiles and 2-7 rows on each of the six reels, 324-117649 ways are possible on Extreme Megaways slot. Your 7 is top-pay at 50x bet for 6-of-a-kind then Bell 7.5x, Bar 1.75x, Cherry 1.5x and six coloured gems at 1.25 down to 0.6x for each full way. Chip scatters can land on all reels and the Star Wilds will only appear via modifiers. Winning tiles are removed for tumbles to replace them and symbols can be stacked.

Modifiers
Above the scroll of 4 tiles is a single long space which can land a spin modifier and these are:
Destroyer - after a losing combination all tiles are removed to be replaced for another chance.
Extra Wilds - a random number of them are added on reels 2-6.
Multiplier Wilds - two Wilds which can be 2, 3 and 5x are placed somewhere on reels 2-5 and multiply each other if in a win together.
Mystery Symbols - these will be added to the reels to reveal the same value, guaranteed win.
Dropping Wild - a reel from 2-5 is filled with Wilds, if no win, the Wilds drop down 1 row giving a free re-spin. If there is a win, even if the Wilds aren't part of it, they drop 1 row down with the spin ending when they've dropped off fully.

Free Games
In some countries these can be bought for 100x bet and you get 5 for 4 scatters, 7 for 5 and 10 for 6. In the free spins, 4 scatters awards +5 and for any scatter over the 4, another +5. You begin at 2x multiplier but before we start there is a gamble wheel. You can gamble your 5 spins to lose all or add +2. Collect, or gamble again for more extra spins, maximum is 14 but at any stage you lose, feature is forfeited! You now get a modifier occur in every free spin and the multiplier increases 1x for each wining tumble, also by 1x in the Destroyer feature whether you win with it or not.

Our View...
Extreme Megaways slot has a 95.60% RTP and isn't bad to play even if it looks a bit boring and has mediocre sounds and animations. Your best chance is with the Multiplier Modifier in the base game, otherwise big hits are rare. The free games are fun, even if hard to trigger and the gamble wheel is brutal, so be very careful. There is 20,000x potential here but you will need at least 7 and preferably 10 or more spins to have a good chance of a biggish total return. Retriggers are simply rare if at all. I won't be making an extreme effort to return to this slot but I've seen worse...