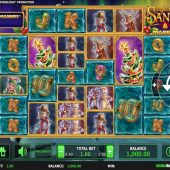 Mystical Santa Megaways slot by StakeLogic is perhaps surprising as it's the first festive version of the mechanic. It's quite similar to their Black Gold Megaways slot too. Not all Christmas themes are soft on the pocket when we consider Microgaming's volatile classic slot Deck The Halls and of course Playtech's funny Santa Surprise. We have some soft jingle bells-type music to set the mood with the reels set over snow-covered trees and symbols made of ice. So will we get bad socks here or can it be a cracker for our bankroll?

We have 6 reels of 2 to 7 rows each including the usual single tile reel above the centre 4 columns on Mystical Santa Megaways slot and thus 324-117,649 ways possible. The symbols are both stacked and single with winning ones being replaced from above the columns. The 6-of-a-kind pays are Santa 50x bet, Reindeer 7.5x, Elf 2x, Snowman 1.5x with six card values from 1.25 down to 0.75x for a full way of 6. Bauble Wilds can appear on the scrolling reel and Tree Stars are the scatter here which can appear on all reels.

There are 5 of them possible.
Mystery Boxes - the Elf throws these in randomly when he appears to the right of the grid. They can reveal Wilds, any symbol including scatters and always result in a win.

These four are given by the Ginger Helper on the left when he appears.
Multiplier Wilds - added randomly to grid with 2 to 10x possible.
Scatter Symbols - triggers the free spins.
Extra Wilds - randomly added anywhere on grid.
Matching Symbols - helps to create a win.

You get 12 for 4 Tree Star scatters whether on the reels or randomly added by the annoying helpers. Each extra one awards 5 extra spins and you can get 3 or 4 on the scrolling tiles for 5 or 10 extras too. Now you do get an increasing multiplier, but not by right after each winning cascade! You need the Ginger Helper to randomly award an extra 1 to 5x in multipliers after each spin, win or lose. Most of the time he doesn't so it takes some of the excitement away although you do see more modifiers during the bonus.

Mystical Santa Megaways slot looks OK but the lack of guaranteed increasing multiplier in the free games is a major drawback. Many Megaways enthusiasts will not be happy with this at all, especially if they land a good win when there's only a low multiplier accrued. The random modifiers are very frequent and it's clear the volatility here is only medium to high as opposed to the usual high variance of this mechanic. It's a novel theme but I would hardly say all your Christmases have come at once...