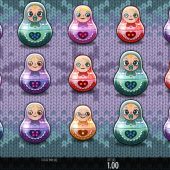 Babushkas slot is from the hitherto innovative developer, Swedish-based Thunderkick. Babushka is a grandmother figure in Russian culture as described here, and one may be aware that those wooden 'Russian Dolls' that all fit inside the largest are actually babushkas. Other than that Kate Bush sang about 'Babooshka' back in 1980.

The game symbols are all, surprisingly, babushkas of various colours on a patterned woollen jumper background. The view reminds me of a colour blindness test, or had I been one that had ever imbibed hallucinogens such as magic mushrooms or LSD, an image my brain would have projected into my eyes on a bad trip.

Stack the dolls for greater wins

For some bizarre reason the game uses a prime number, 17, for the amount of paylines - although this is not uncommon for Thunderkick. There is an in-play feature whereby should you get a win the babushkas will upgrade once if a further win can be obtained, and so-on. So the colours of the dolls often change in their mind-bending way. The highest 5-of-a-kind is the yellow doll paying 2x stake. This tells us immediately that the game is crushingly low in volatility and the return-to-player is quite low for Thunderkick at 95.8%. Although according to this thread on the CasinoMeister forum, Thunderkick dropped RTP's fractionally on all of their games in December 2015. Back to the game - should you match all symbols in this upgrade to a full screen you will get 1 more upgrade of the full screen. Should this full screen be the top-paying yellow dolls, when it upgrades they turn to ghost dolls and you will win a staggering 100x stake.

The Wild on the middle reel

The Wild is actually the feature on Babushkas slot. It only appears on reel 3 and will do one of the following things; offer a standard win as a Wild, award 7 free games with each spin getting the wild guaranteed on reel, upgrade all symbols one level and the lowest values on the screen will upgrade either once, twice or 3 times depending on how fat the bear is inside the wild doll.

The slot is undoubtedly innovative in respect of the gameplay but the execution is hopeless. Should you be able to watch the reels without developing a severe migraine then the tedium of the variance will get you anyway. The upgrades slow down a game that instinctively makes you impatient. I'm afraid this babushka should be banished off to the Siberian salt mines.... For more entertaining Thunderkick slots, try the Mexican-inspired Esqueleto Explosivo or the feathered friend of a slot Birds on a Wire.