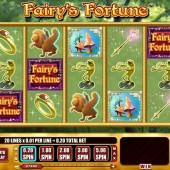 Fairy’s Fortune is a mystical themed slot game from the developers at WMS Gaming that takes you to a world where fairies are real and big wins do happen.

This slot is a 5 reel, 20 pay-line gaming experience that will appeal to fans of other WMS Gaming slots including the popular sci-fi themed Star Trek: Red Alert and the legendary mythical Greek themed Zeus.

One thing WMS gaming knows how to do well and that is develop slots that will keep you wanting to come back for more. There are not many developers out there who could produce such a successful range of slots that an entire online casino becomes synonymous with their games in the way Jackpot Party has done for WMS Gaming slots.

The imagery included in Fairy’s Fortune puts you in a world of make believe where the impossible seems possible. Symbols in the game include Fairies, a Frog playing a horn, a Winged Lion, a Moon with human facial features, Mushrooms, Caterpillars and a Ruby Ring.

The Wild symbol can be found on reels 1, 3 and 5 during regular game play and it can replace other symbols to complete winning combinations. However, the symbols it cannot replace are the Moon, Caterpillar and Mushroom symbols.

These three symbols are key to unlocking the game’s various gripping bonus features. If you hit three Moon symbols on the 1st, 3rd and 5th reels then you will activate the Fairy’s Fortune Bonus feature. In this feature, you must choose from a number of items on the screen to reveal a multiplier or a fairy. If you reveal the fairy then you will be taken to the second phase of this feature where you must select a Star to reveal a multiplier that could have a potential value of 100x giving you potential for a fantastic win.

If you manage to hit three Mushroom symbols on reels 3, 4 and 5 then you will activate the Mushroom Bonus feature. In this feature, you will be presented with a selection of mushrooms. You must select a mushroom to reveal a prize that could be free spins, multiplier value or the chance to play the Fairy’s Fortune Bonus feature.

There is also a third bonus feature in the form of the Butterfly Bonus feature. This is activated when you hit three Caterpillar symbols on reels 1, 2 and 3 on an active pay-line. Once activated, numbers will be added to the caterpillars on the reels. These will then transform into butterflies that will fly around the screen and land on the reels. The number that is presented on the screen is the multiplier value that is then added to the line bet you have placed.

Fairy’s Fortune is all about the main bonus feature where you can win some huge sums of money. The fact that it also comes with two smaller bonus features that offer additional chances to win is great news and something that many slots out there do not offer. This could be a classic in the making with so much potential to win and is well worth your time checking it out.