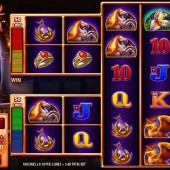 Responsible for some big wins on - and big fans of - the popular land-based version, the fantasy-themed Fire Queen from slot developer WMS Gaming has made a seamless transition to the online platform.

Fire Queen is part of WMS's Double Money Burst range. At first sight the game-screen contains a bewildering array of reels, but in fact it's a straight 100 pay-line online slot - with a few differences.

As with other slots in the Double Money Burst portfolio there are essentially 3 sets of reels on-screen: two 2x2 reels and one 3x6 set of reels. In the top half of the screen there are 50 pay-lines in action, with a further 50 pay-lines in action on the bottom. Throw some expanding Wilds and stacked icons into the mix and you have the making of a cracking game.

In terms of symbols we get the mysterious well-endowed Fire Queen herself, dispensing fireballs as well as big wins, a phoenix, a candle, ring, horse, yet another phoenix, lotus, pendant, and magic potion. There are also some basic 10-to-Ace symbols.

The Fire Queen is Wild

The Fire Queen is Wild and works in an interesting way. Substituting for all regular symbols other than the Crystal Ball Scatter, if she appears on the left-hand set of reels she can transfer to the other small set of reels. If she appears on reels 9, 10 or 11, however (the ones on the right-hand side) she expands to fill all six rows. This she does in glorious fire-heavy animated glory. It's almost like an arcade beat-em up!

Earn up to 20 Free Spins with a 100x Multiplier

Free spins can be won in a number of ways. You can either match four Scatters on reels 1-4 (the top-left set) and/or reels 5-8 (the bottom-left set), or hit Scatters on reels 9, 10 and 11 (the big reels to the right of the screen). Five spins will be awarded at minimum, but if you hit four matching symbols and three more elsewhere you'll bag 20 free spins. Spin wins will be multiplied, anything up to 100x.

While Fire Queen may be better-suited to land-based casinos - it's a real crowd-pleaser with lots going on all the time - it's a fairly faithful recreation of a live favorite. Other than the animated expanding wilds the graphics are pretty so-so, but this is nit-picking: the game is a great addition to the developer's other Double Money Burst slots like the summer-themed Pool Party (with its Mystery Clump bonus for extra-long stacks) and the nautical-themed Neptune's Quest with its own version of stacked icons.