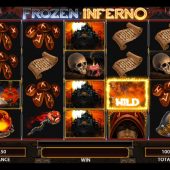 A quick glance at the name of the Williams Interactive (WMS) slot Frozen Inferno could lead you wondering how on earth the makers of this game came up with this oxymoron. However, on closer inspection of this 5 reel, 40 payline slot game it is evident that it is not actually a frozen inferno, but two separate games - one in a frozen world and another in a fiery hot world. On entry to the game you will start in one of the worlds and move to the other world later following the feature.

Every game starts with a sticky Wild

Frozen Inferno is very much an unconventional slot game, with the focus more on accumulating Wilds rather than landing multiple Scatters. Each new game on the Frozen reels starts with a sticky Wild on position 3 on reel number 2. In the Inferno game the Wilds are roaming, moving up and down and right to left with each spin, sometimes moving completely off the reels. With every new fire symbol that appears, a new Wild is added to the reels and they will continue to accumulate in subsequent spins until you trigger the bonus feature - more on that later.

The Frozen reels have a slightly different set up, where the sticky Wilds are fixed (in effect frozen) in position. With each new Ice symbol you will gain another Frozen Wild, which also continues until the bonus feature is triggered. The symbols on the reels are similar in both Frozen and Inferno, with a few variations to suit the world you are in.

In either the Frozen world or the Inferno world then free spins feature is triggered when you land a 5th Ice or Fire symbol, where 4 Wilds are already in place. Your reels will then be replaced with a new set of bonus reels that combine both worlds together. During the free spins both Frozen Wilds and Inferno Wilds will accumulate on the reels with each winning spin, so the potential for a lot of Wilds appearing is greatly increased. The feature stops when you achieve 5 Wilds of the same type and you are transported to the opposite World you started in.

It took me quite a while to figure this game out, with several trips to the payable and info page. Eventually I figured it out, but I am wondering if other players will show such patience. I have to admire the game developers at Williams for trying something different, but the low volatility nature of this slot and the unusual game play might see it lose out to other slots. I can see it having a bit of a cult following from those players that yearn for something a bit different. If you enjoy a bit of fire in your game play then why not check out the MultiWay Xtra slot Fire Opals from IGT. One of my personal favorites, when it comes to natural elements.