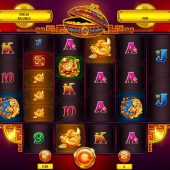 Jin Ji Bao Xi Megaways slot (or Endless Treasure the English alternative name) by WMS/SG isn't their first use of the mechanic, as we have seen with Montezuma Megaways slot which was pretty mediocre but we did get a decent game in the form of Raging Rhino Megaways slot. The one that produced a monster 97,000 plus times stake win in the base game, Spartacus Megaways slot, put paid to my previous assertion that SG always use low symbol pays resulting in very limited potential! Here we get atypical Chinese music, a rich red background and off-the-shelf oriental symbols so nothing to see here really. So can we add some treasure to our bankroll or will the pain of losing be endless here?

On the reels...
We get 6 reels of 2-7 rows here on Jin Ji Bao Xi Megaways slot meaning 324-117649 ways to win. Symbols are stacked and single and don't tumble when wins occur. You have a bottom scrolling row of 4 symbols where Wilds can appear, but they also appear on the main reels 2-5. Coin scatters can appear on all 6 reels but not the scroll. There is an odd stake here, 22-coins as opposed to most Megaways being 20-coins, I suppose to allow the lucky Chinese number 88 to be played! This makes the 6-of-a-kind pays slightly odd, but rounded they are 11x Dragon, 7x Phoenix, 5x Tiger, 3x Turtle, 2x Carp with six card values paying 2x down to 1x.

Jin Ji Bao Xi Feature
Every time any Wilds appear on the screen, they will zoom into the open pot at the top of the reels. Randomly, the pot will close and award a pick-me screen. There are 4 fixed game jackpots on the right each represented by a colour. You simply pick tiles until 3 the same are revealed. The prizes are about 142x Mini, 244x Minor, 1136x major and 2273x Grand.

Free Games
You need 4 or more coin scatters to get a selection screen for varying levels of volatility. You will play the spins with only card values, scatters and Wilds on the reels plus your chosen premium symbol. The options, highest volatility first, are:
4 Spins - 26 Dragon symbols on each reel.
6 Spins - 24 Phoenix symbols each reel.
8 Spins - 22 tiger symbols each reel.
10 Spins - 20 Turtle symbols each reel.
12 Spins - 18 Koi Carp symbols each reel.
Random - will choose a spin number from above and a symbol.
You get +3 spins for 3 or more Coin scatters during them. You will also get 5x bet for any Coin Scatter appearing, then 6x bet the next spin one appears on and so-on until they reach 12x and thereafter that's what they will be fixed at.

Our View...
Jin Ji Bao Xi Megaways slot has a 96.06% RTP and is back to the bad old WMS low-pay and low-potential set-up. You cannot win much in the base game bar the very rare fixed jackpots, otherwise forget it. The feature isn't rare but is pretty dire to watch and rarely lines up your chosen premium - most wins come for the scatter pays as described above. If you are dreaming of landing a big stack of your premium in free spins on all 6 reels, think again. It could happen, you could get a massive win that way but I bet you don't! No endless treasure here, just endless mundanity alas...