Monopoly – Once Around Deluxe slot

Free Monopoly – Once Around Deluxe slot

Monopoly – Once Around Deluxe slot review 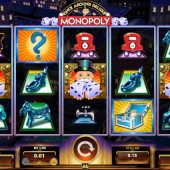 Since taking over the rights to release ‘Monopoly’ branded slot games at the beginning of 2015, WMS have been slowly rolling out new titles such as Monopoly Big Event and Super Monopoly Money. The third one out of the production line is Monopoly – Once Around Deluxe. This 5 reel slot has 15 paylines and has a very unappealing RTP (return to player) in the base game of 92.03% - not a great start.

If this game is triggering some memories then there is a good chance you may have seen it in land based casinos. It has been around for a little while now, although it is not clear whether slot players have warmed to it yet.

Why is it called Once Around Deluxe?

Although this has not been confirmed, my guess is the name is related to the bonus feature in this game, which involves a trip round the Monopoly board picking up rent on the way. The base game is set on a dark background, with lots of pieces from the popular board game featured on the reels. The boot, dog, racing car, cat and top hat are all there, along with some symbols for the utilities and free parking. Mr Money Bags is also featured as the bonus symbol and also as the Wild in a different symbol. There is also a community chest and chance symbol. If you are a fan of Monopoly then you will not be disappointed with how this game looks.

Wins in the base game are fairly limited, due to the limited paylines and poor RTP. The biggest wins seem to come from landing 5 of a kind, which pay anywhere between 20x – 200x. Your best chances of winning anything of substance are in the bonus feature, but don't get your hopes up.

Bonus round or farcical feature?

I will start by explaining the bonus and that way you may see why I think this could be a farcical feature. To trigger the bonus you need to land 3 or more Mr Money Bags bonus symbols on a single payline on the first 3 reels – a feat in itself. Once you achieve this you are then ported off to a version of the Monopoly board for a ‘once around’ go. The only way to go round twice is if you land exactly on the ‘start’ square after your first circuit. As you land on the different properties you collect rent, which contributes to your bonus total. You can purchase properties before the bonus starts and then if you land on these properties you get a chance to win a bigger stake.

In principle the idea that you can buy properties and potentially improve your chances of winning is a good one and really fits well with the Monopoly board game. However, the reality is that there is a very high chance you will come out of the bonus with a negative total. This to me completely flies in the face of what a bonus is all about. And for me makes this bonus game more farcical than fun.

If I didn’t make it clear in the bonus section, then I will do so again now – this is not a slot that I can recommend trying for yourself. It’s poor RTP at 92.03% (increased slightly to 94% with the bonus bet) coupled with a bizarre bonus feature where you can actually end up with a negative total is just bewildering. If you like board game slots then give IGT’s Cluedo or their Battleship– Search and Destroy a go as you will get far more from these games then you will from Monopoly – Once Around Deluxe.