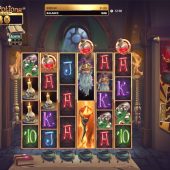 Perfect Potions Megaways slot by WMS or Scientific Games, whichever you prefer, is alas a pretty dire addition to their existing Megaways collection. Raging Rhino Megaways slot was perhaps the best with its huge potential, Montezuma Megaways slot a tad weird and frustrating for the player while the unremarkable Spartacus Megaways slot recently produced a hit of nearly 100,000x bet in the base game! Here we have the oft-used cartoon magician or wizard-with-potions theme, a dark stone castle room as the background and jaunty suspense music as we spin. So can this game be perfect for our bankroll or will we find this a bitter potion to swallow?

You have 6 reels here on Perfect Potions Megaways slot with 3-8 symbols on reel 1 and 2-7 on reels 2-6. The rules state a maximum of 96040-ways which is odd as 8 on reel 1 and 7 on the last 5 reels would equate 134456-ways so perhaps they are limited? Anyway, the 6-of-a-kind pays are Wizard 7.5x stake, Orange Crystal 6x, Frog 5x, Eyes 3x, Skull 2.5x with 5 card values paying 1.5 or 1x for each full way. You can get bonus scatters anywhere on the reels and there are no Wilds for now. Symbols appear stacked and single with winning tiles, including bonus scatters, replaced from above with no multiplier. It's the Potions above the reels we need to examine as regards modifiers.

Above reels 2-6 each spin, any amount or combination of red or blue potion bottles can appear, maximum one above each reel. Your objective is for winning tumbles to allow them to drop to the bottom row of the respective reel, into the cauldron to trigger their modifiers:
Red Potion - will make a full-reel Wild, with a multiplier of how ever many rows the reel had. After the win is paid, another random potion bottle is placed above it.
Blue Potion - the reel doubles in height/amount of rows. When this happens, new symbols cascade into it and a Red Potion is placed above it.

You get 10, 12 or 15 for collecting 4, 5 or 6 scatters during any spin. Any expanded reels are carried over to the bonus if present upon triggering, and like any new expansions occurring via the Blue Potion, will remain there for the duration. You get 4, 5, 6 or 8 extra spins for collecting 3, 4, 5 or 6 scatters during any single free game. If you unlock a Wild reel via a Red Potion it may randomly display a multiplier which multiplies all symbols on the reel by the amount shown. The game appears to use altered reels during the bonus.

Perfect Potions Megaways slot has a RTP of 96.07% using only bonus buys and 96.31% played normally. The game looks OK and has decent enough sounds and graphics but that's where the positives end. The base game is awful with a low win frequency and rarely hitting wins of note. As it collects bonus scatters for the trigger, you often see pointless animations whereby there's no win on the grid and say a single bonus tile on reel 4 or 5 or 6 which when replaced, cannot possibly trigger the feature or create a win. Terribly annoying. The fact that a bonus buy is only 50x bet tells you all you need to know - the average pay for it must be about 48.00. And more often than not, 10-20x with a very rare 'good' bonus paying into the hundreds. Perfect? This game is far from being perfect in any way, shape or form...