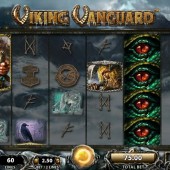 It's fair to say that slots developer WMS Gaming are one of the biggest names in the gaming industry and when they release a slot the industry tends to stand up and take notice. The attention is particularly acute when the developer releases a slot with a theme that has previously proved successful for them.

In this instance, WMS Gaming has released Viking Vanguard. This is a 6 reel, 60 payline slot that has a very similar Norse theme that gifted the developer with so much success when it released its prolific Norse Warrior slot. It has even been suggested that Viking Vanguard is being considered as an unofficial sequel to Norse Warrior, which will please fans of Norse Warrior!

6 reel appears to be the standard set by WMS Gaming after it experienced positive reviews for its other 6 reel slots releases such as the epic Zeus III slot and the incredibly popular Raging Rhino slot. The symbols on Viking Vanguard's reels are not too varied. You have the muscular Norse male (that covers two positions on the reels), the rugged-looking Norse female, a raven, a wolf, and some Norse symbols that act as the regular symbols. I would write them down but when I checked my special characters options Norse was not officially listed!

The Wild Dragon's Eye is Watching You!

The Wild symbol is represented by the dragon's eye symbol which casts a sinister feeling over the reels when it appears. It appears as a Stacked Wild on one reel every spin and has the ability to substitute for all other symbols, except for the Bonus symbol, to complete winning combinations.

Viking Vanguard is not one of the most imaginative slots in terms of themes or aesthetics but WMS Gaming has delivered a riveting slot that has 6 reels, Stacked Wilds, and the potential to trigger a lot of free spins. This is one of the most thrilling slots I've had the pleasure of playing and even if you're going through a barren spell on this slot, just the possibility of what you can win is enough to keep you coming back for more.