There are a few slot machines that hold legendary status in the casinos of America and one of them is the Wizard of Oz. Based on the incredibly popular series of books from writer L Frank Baum, this video slot takes you on a journey up the yellow brick road and potentially to the gates of the Wizard of Oz himself.

In recent years WMS have been migrating several of their popular land-based slots into online slots, with Wizard of Oz being one of them.

Does it live up to the land-based machine version?

Having played most of the online slot games I can tell you that the Wizard of Oz slot machines found in the casino are superior to the online version, but surprisingly not by much. There are many similar features in both versions, including the award of a wild reels by Glinda the good witch at random intervals in the base game. Up to five reels can be made wild, with a minimum of one, which can be very rewarding.

The bonus rounds are where some real big wins can be enjoyed, which are triggered by the feature symbol appearing on reels 1, 3 and 5. It is then up to you to pick one of the 3 feature boxes and reveal your prize. There is one cash prize, the road to the Emerald City feature and the Winged Monkey feature. The road to the Emerald City can potentially take you to the Wizard of Oz as you pick Emeralds to take you through. You will bump into Dorothy's friends tin man, scarecrow and cowardly lion who will help you on your quest. The Winged Monkey feature is much different, with 8 free spins granted to you. Each time the winged monkey symbol appears on the centre reel the winged monkeys swoop in and reveal wild symbols across the reels in the next spin. The more wilds you get the better it usually is for you.

Wizard of Oz may not be quite as thrilling as its land-based equivalent, however, it certainly still is an awesome slot. Not many slot games are built to take you on a journey through various bonuses, picking up friends like Tinman and the Scarecrow on the way. That being said, you do need to keep track of your playing time as you can get caught playing for long periods as you try to get further in the bonuses.

WMS has released many other slots online that have been successful in land-based casinos including the hugely popular Super Jackpot Party and at least one version of Zeus. There are also some Colossal reel slots being released, with Kiss online slot.

Screenshots from Wizard of Oz slot 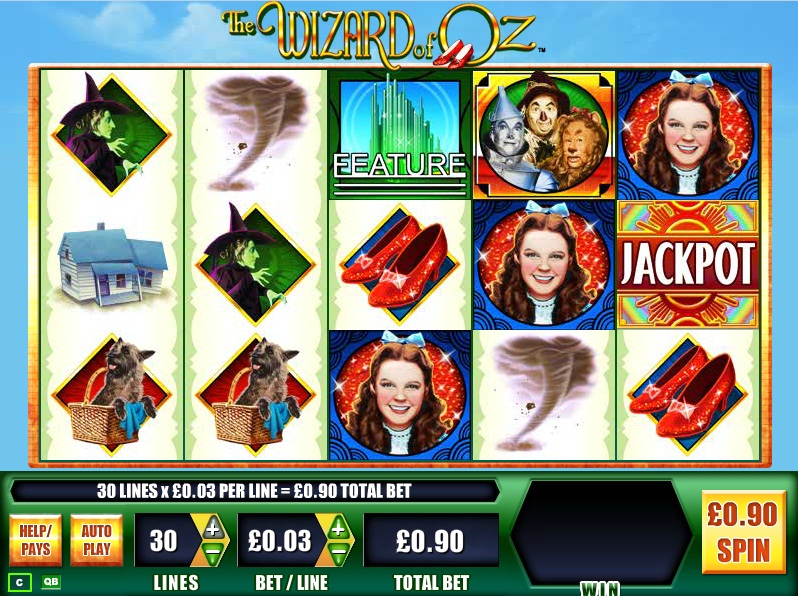