Legend of the White Snake slot 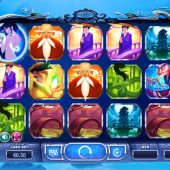 Yggdrasil are an up-and-coming slots developer whose games are being found at more and more online casinos, and they have successfully acquired a UKGC license. Their games tend to be quite volatile and the return to player is on the decent side, ranging from 96-97% pretty much in line with other major developers such as NetEnt and Play'n Go.

Who is this Legend?

Before you think of David Coverdale rasping out 'Fool For Your Lovin' Legend of The White Snake actually refers to a Chinese tale from the time of the Ming Dynasty. To cut a long story short, the White Snake had swallowed some immortality pills giving 500 years of life and was able to transform into an alluring woman, along with her friend the Green Snake which she saved from a grizzly death when she saw a vendor offering it for sale for its body parts, and having transformed into a woman bought it and saved it.

Unlike the legend, the slot version is quite simple. In fact so simple we may implore the White Snake Lady to manifest her powers and work some magic on it. Legend The Of White Snake is of the usual 5-reel 3-row format and has 243 ways. The twist is that the game pays both left-right and right-left for any combination of 3 or more consecutive symbols. There is no bonus feature! The soundtrack is the obligatory oriental-style pipes, gongs and cymbals tune and this compliments the excellent and bright graphics - no A, K, Q etc. here!

So is that it? Not quite. I mentioned the lack of a feature therefore the absence of scatters but there is of course a Wild - and indeed this is rationed too as it only appears on reel 3. Like the other symbols it is not stacked but it does incorporate a re-spin. Each time the Wild appears it will stick for one spin regardless of whether there was a win or not. Should the Wild appear again you will then have another re-spin with both Wilds stuck on reel 3, and the same if a third one appears.

This snake does actually have some fangs - should you hit 5-of-a-kind with the top-paying symbol of the alluring naked lady entwined with the snake, you get a whopping 100x stake if it includes the Wild. That Wild though is venomous in this case, as 5 without the wild pays a huge 1000x stake, something unheard of as yet on any 243-way slot for a single way 5-of-a-kind win. That brings us back to the original statement concerning volatility: playing this game is akin to tickling the chin of a coiled cobra..... Another game that springs to mind when I think snakes and venom is the awesome Medusa slot from NextGen, although this is another slot that can be streaky, potentially draining your funds.