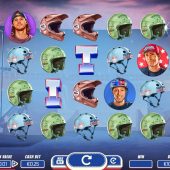 Nitro Circus slot takes us into the noisy world of USA petrol heads and their stadium monster truck and stunt riding shows so popular in that part of the continent. Here, Microgaming's Monster Wheels meets Racing For Pinks as we open to some real film action from the shows and of course the thrashy guitar based music that always seems to accompany this kind of action. The transparent reels are set over a backdrop of the stunt arena and we hear the enthusiastic crowd cheering these daredevils on in their quest for more points, but will our bankroll crash and burn or can it come through the obstacles here unscathed?

There are 4 rows over 5 reels on Nitro Circus with single icons although two can appear on one reel and we have 25 paying lines for which we pay 25 coins a spin. Travis is the top-paying 5-of-a-kind symbol at 500 coins with a big gap down to Ryan at 150, Kurtis at 120 and Todd 100 for a full line. No card values here as we have coloured Helmets of which the Brown, Green and White pay 60, 50 and 40 coins respectively. Wilds can appear on all reels bar the first and scatters on all 5 but first we must see the effect of just two scatters.

By the left of the reels there are 4 oddity stunt vehicles which are the Bath, Rocking Horse, Jeep and Armchair. If you accumulate 5 of any you are taken to the Nitro stunt course to complete 3 jumps to accumulate multipliers and coins before a final big jump to land on a bigger multiplier. Now if 2 scatters appear 5 rewards are offered - 10 free games, 3 of the 4 oddity stunt symbols and a Wild icon. The rewards explode and the one left is awarded. They are self-explanatory except the Wild which adds stacks and singles usually for a decent win.

When collecting 5 of any of the oddity vehicles on the left, you complete the stunt course. Each vehicle has a different rating, so one might be good at the final multiplier jump but bad at collecting coins along the way etc. Once you complete the course the counter returns to zero for the vehicle.

This is the same as the above except you trigger it with NITRO landing across all 5 reels. You get a choice of Motocross Bike, Scooter or BMX. You can add speed boost via the control with all the above vehicles which will increase the final jump and thus gain you a bigger final total multiplier but increases the chance of crashing too which simply leaves you with a small coin award at the end! In this bonus you can also jump through and collect an oddity symbol or two which is added to the meters at the left of the reels.

Landing 3 scatters will trigger 10 free games or 20 and 30 for 4 and 5 respectively. During these only one scatter is required for the Nitro Blast and rewards can be Wilds, retrigger, 1 to 3 extra spins or +1 multiplier plus all 4 of the oddity vehicles. Good fun to watch but rarely do you win too much!

Nitro Circus slot has one very good side to it - the RTP is a sizeable 97.00% but I'm afraid it gets worse from there. It's not that isn't action-packed because it is, whether you like the loud thrashy music or not which you can mute anyway. The problem is the volatility and it's far too low in my view as base game hits seldom exceed 15x bet and the NITRO feature is pretty much the same. The oddity ones when triggered, which can take an age by the way, are better and you'll likely see wins around 40 plus x bet but really there's not a lot else to look forward to here. Despite Yggdrasil's attempts to make the game seem interesting with multiple features, I'm afraid I got bored very quickly and as a result won't be stunt jumping in this arena again...