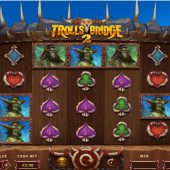 Troll's Bridge 2 slot by Yggdrasil Gaming brings us again, like their original Troll's Bridge game, into the underground world of legendary meanness dished out by these evil little creatures. Trolls do make for some good themes as we saw also with Betsoft's Troll Hunters and the original and very good Trolls slot from Netent, so how does this game stack up? Well of course you know the reels will be set over a menacing drawbridge adorned with skulls and other symbols of doom along with deep sinister music, so the scene here is set exactly as you would imagine. How much will these evil little blighters want from our bankroll to get across this bridge though?

You get 25 fixed lines across a large grid of 5 reels and 4 rows on Troll's Bridge 2 slot and you will no doubt expect some random goings-on but before we get to that, those pays are important! The top 5-of-a-kind win is the Red Troll at 10x bet, Purple 6x, Green 5x, Blue 4x with four card suits all paying 1.6x for a full line. Wilds can appear on any reel, usually from one of the modifiers and scatters appear on all reels in the shape of Skull. You may find the Trolls can randomly land as 2x2 or 4x2 colossal symbols to assist your game and the symbols otherwise appear stacked or single on all reels.

The Bonus Cauldron may land on reel 5 and give you a pick which is usually 2 to 40x stake but can also award a 3,4 or even 5-scatter feature trigger.

A Bonus Stone can randomly appear after any win and multiply it 2,3,4 or 5x.

Golden Bet - if you play 10 coins extra per spin, you get 1 extra feature pick when triggering the free games.

So once you've selected your feature enhancements, the spins begin and can yield some decent wins if you got lucky on those all-important picks. You don't however get the Bonus Cauldron during the free games.

Troll's Bridge 2 slot follows the same essential mechanic as many Yggdrasil slots have used before, including the original Troll's Bridge. That's not to say it's a bad game because it's entertaining and the graphics and animations superb, as are the sound effects. Your RTP is 96.10% but increases to 96.70% if you use the Golden Bet. The Bonus Cauldron is annoying as it always seems to give 2-4x bet and seldom will trigger the feature but you never know. In reality this is Yggdrasil's equivalent to Netent's Secret of the Stones slot which is a popular mid-variance game like this. I don't think you need fear the guardians of this particular bridge too much...