As we get close to Halloween, the Season of the Witch has provided plenty of inspiration to the many slots developers out there, who are keen to grab your attention. As it is the season to be spooky I thought it was time to take a look at the top 5 Halloween-themed slots out there for online fanatics. 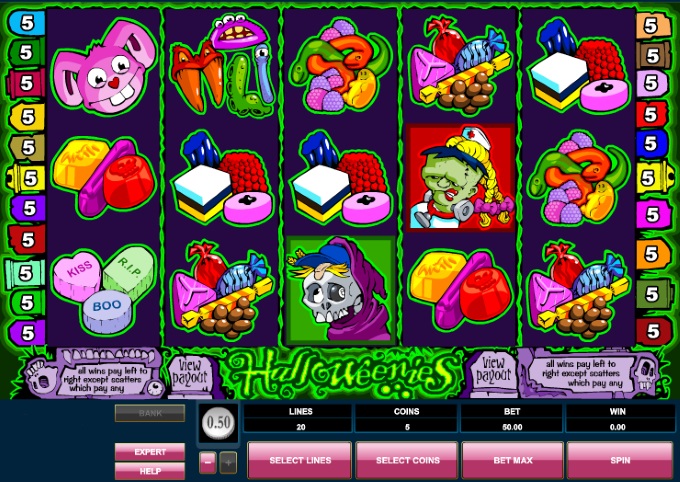 Where better to start than the recently-released Halloween gem from Microgaming. The 5-reel, 20-payline slot takes a rather Tim Burton-esque bent on the horror theme, with characters that look like they’ve stepped out of one of the maverick director’s weirder cinematic concoctions.

There’s a right mix of ghoulish Trick or Treating weirdos here – an undead nurse, a talking skull, etc –  but the emphasis is definitely on treats, with plenty of Liquorice Allsorts and Dolly Mixture mixing it up on the reels (god knows what the ‘tricks’ would turn out to be).  If the screams and FX won’t get you, 13 free spins and a Pick ‘Em Bonus with 13 pumpkins to choose from certainly will.

DO: Play the game through a mobile casino. The app is as slick and fun as its online counterpart.
DON’T: Answer the front door while playing this. You never know who’ll be trick or treating on October 31st.
Review: Halloweenies 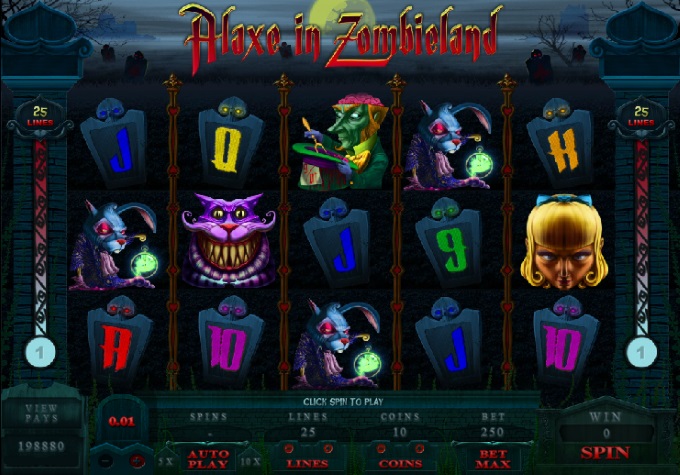 Alaxe in Zombieland is what all nightmares are made of. freaky faces and ghostly symbols

Yep, you guessed it – we’re in Alice in Wonderland territory here, but with a difference – the acid doses have been ratcheted up a notch, the designer’s fluorescent palette set to stun, and a Halloween-obsessed slots developer on overdrive.

With some truly whacked-out characters (a psycho Alaxe stares intently at you throughout and a genuinely frightening purple Cheshire Cat is just wrong) Alaxe in Wonderland isn’t a game you want to be up late playing.

The game comes with some nice bonus touches, specifically a Free Spins/multiplier feature that has you choosing from the Mad Hatter’s teapots beforehand to see how many spins you get first. Zombie fans will get a kick out of the game, and a top jackpot of $10,000 should ensure everyone else is sucked in too.

DO: Hit the gold key on Reels 2, 3 and 4 – it triggers a great multi-layered bonus round
DON’T: Play late at night, or while under the influence of Class A hallucinogens. Or both
Review: Alaxe in Zombieland 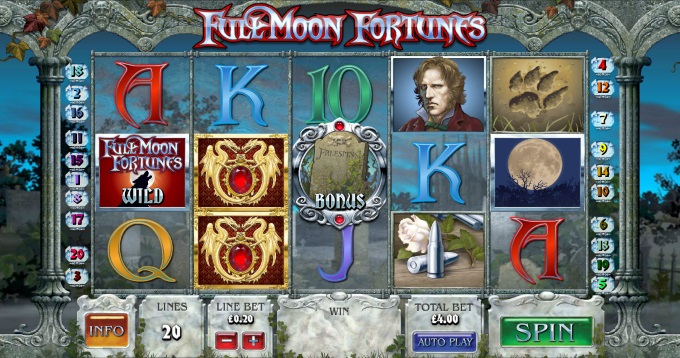 Playtech’s Full Moon Fortunes is a much more sinister slot, with shades of True Blood

If An American Werewolf in London is the benchmark for werewolf movies, then Full Moon Fortunes from Playtech should be the standard for hairy-palmed slots everywhere.

Reel 5 is the player here, as a Full Moon symbol landing on this reel turns any symbol featuring the main character, Dr. Blackwood, into a raving Dave Lee Travis (but without the court case). To go with the Doc’s new facial hair look, you’ll earn an increasing multiplier up to 5x on your wins, making this a great – and original – bonus to hit.

There are also free spins galore in this slot based on the classic gothic Wolfman tale, and you can earn a multiplier of up to 3x on those. We’re not done on horror thrills, though – land Dr. Blackwood on the reels during the free spins, and he’ll apply a 25x multiplier to all winning combo wins.

DO: Check out Aristocrat’s Werewolf Wild, where an animated claw swipes across the reels to turn other symbols Wild.
DON’T: Watch the 2010 remake of The Wolfman, starring Benicio Del Toro. It sucked. Really badly.
Review: Not yet reviewed 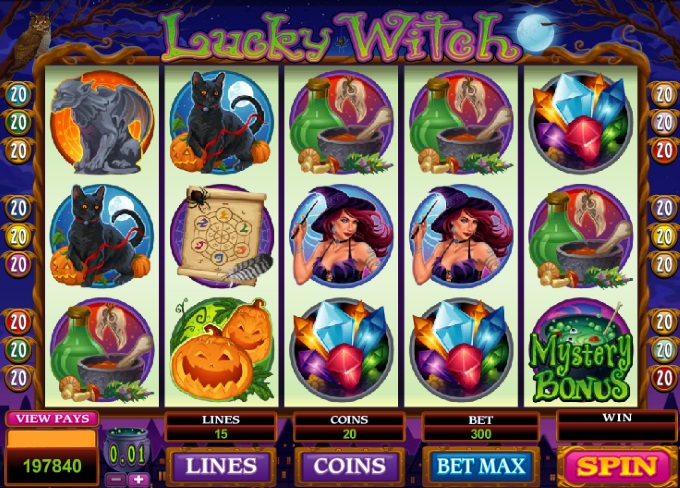 More sexy than scary, if you are into girls with pointy noses, black cats and a cackle-laugh

If buxom beauties, stacked Wilds and ghoulish symbols are your thing, you’ll probably get a kick out of Microgaming’s Halloween-themed slot, Lucky Witch. Appropriately, 13 free spins are up for grabs in the game’s main bonus feature – simply hit three or more Scattered Potion Bottles across the reels – while five bottles awards a very nice 60,000-coin top jackpot.

Microgaming’s bonus-makers were obviously in a good mood when they commissioned this game, however, including in the game not one, but FOUR, extra Pick ‘em Bonus rounds to squeeze in amongst the free spins.

DO: Check out Lucky Count from Aristocrat, which offers similar ghoulish thrills.
DON’T: Accidentally call it Lucky Bitch, as I did while writing this blog.
Review: Lucky Witch 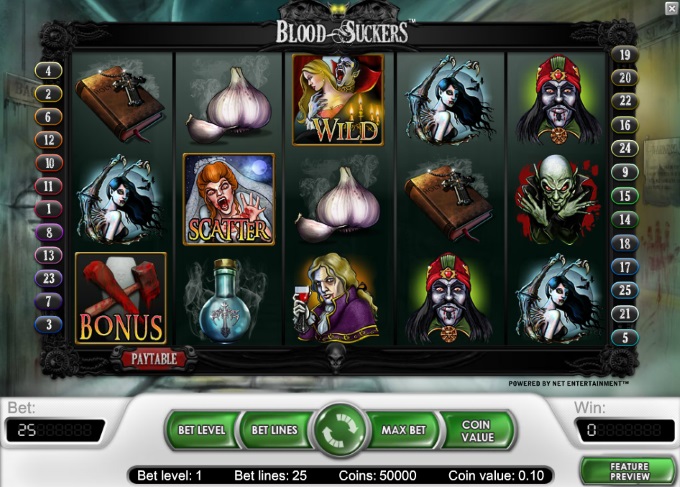 Someone is after your blood! Keep your neck where you can see it with Blood Suckers

You know you’re in for a ride with NetEnt, leading purveyors of pukka animated online fare, and the vampire-themed 3D slot, Blood Suckers, is no different.
Amidst all the cups overflowing with blood, garlic, holy water and shrieks on the soundtrack, there’s a slick slot banging on the coffin doors wanting to be let out.
The jackpot of $15,000 should ensure even the most ardent anti-vampire slots player will warm to the game, while the bonus game is great – an eerie Pick ‘Em Bonus game with 12 unopened coffins. Pick correctly and a vampire will launch himself at you. Simply stake him where it hurts to earn many times your ‘stake’, while vampire bats flying out spell the end of your game.

DO: Stick (or should that be ‘stake’?) with the game – the RTP is a generous 98%.
DON’T: Put Twilight on in the background for atmosphere. No, really don’t.
Review: Blood Suckers

Good luck this Halloween, be safe and gamble responsibly. I hope my suggestions give you some ideas, but remember there are plenty more spooky slots out there waiting to be tried.