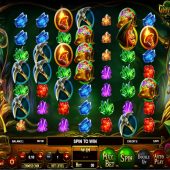 Giovanni's Gems slot is possibly Betsoft's answer to those colossal reel cluster games created by Play 'n Go such as Gemix or Cloud Quest and it looks even better with their glossy trademark HD graphics and animations. Giovanni may be an Italian name but somehow he has ginger hair and looks a little like a Leprachaun in a hoodie standing watch over our transparent reels set. The backdrop is a mythical forest with soothing classical music as we spin. Now these reels seem full of riches and Giovanni appears to be a happy character so will he let us leave this forest with some of its treasures?

We have 7 reels of 7 rows each as we don't get pay lines in this cascade-style format, but need to see clusters of 5 or more adjacent symbols for a win. As clusters are paid they explode away in a spectacular animation and new symbols drop down from above to replace them. The pays range from 5 to 25+ clustered icons so it's best to indicate the awards with both the minimum and maximum pay. We pay 30 coins for one play and the icons award the following coins for blocks of 5 to 25+:

There are no Wilds in Giovanni's forest but he does have the ability to do what alchemists have dreamt of for centuries - turn coal into diamonds! Any Coal symbols which appear next to winning clusters are turned to Diamonds and pay 0.4x bet (12 coins) each before disappearing themselves. Giovanni is the scatter and we need 5 or more in view to trigger a good free games bonus.

Five Giovanni's in view will award 7 free cascades, and the quantity goes up by two for each one over 5 thus 10 would award 17 cascades and the maximum is 50 if you landed 25+ in view. Oddly, unlike say Big Time Gaming's Bonanza slot, when 3 or 4 appear they get paid their coin value and disappear and won't stick around in the hope that more drop down to complete the free cascades trigger. It is possible to get 2 in view which don't attract a coin win and then get the required 3+ dropping down afterwards but this is very rare and you'll find the 5+ scatters simply appear in one go out of the blue and usually more than 5 which is good!

There are no multipliers or Wilds added in the bonus but the coal symbols are replaced by Diamonds now which pay individually and are quite frequent so as well as the 12-coin pay for just one you will find more explosive action to increase the chances of other winning blocks. If you get a cluster of 25+ Diamonds there is a 3000-coin (100x bet) prize. Giovanni disappears along with his Coal in the bonus so no retriggers, but the result is seldom poor.

Giovanni's Gems slot is one of the most spectacular games graphics-wise you'll possibly ever play. Win frequency is good as are the free cascades rounds and it's refreshing to see a slot of this type where it's not unusual to get 5 or more winning cascades in succession rather than they just fizzle out after one or two wins. In the bonus some plays last quite a long time due to the Diamonds dropping down and paying for just a single symbol so you'll be unlucky to see less than 30x bet for a bonus. You'll not get huge wins as 100x bet is the maximum award but they can and do build up some decent gains for your bankroll. All I can say is that you should make a date with Giovanni...