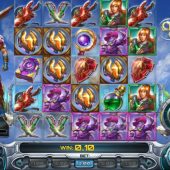 Cloud Quest slot is a Play'n Go 'special' and by that I mean that annually this Swedish developer tends to produce one glossy and high-spec slot that stands out from their other creations, for example the spectacular Viking Runecraft or the stand out Tower Quest. Like that game we have a slot with the workings of Gemix but with a movie-quality fantasy theme based upon witches and wizards and their spell books and potions. So is the sky the limit with Cloud Quest?

You need to connect three or more matching symbols along any diagonal, horizontal or vertical line anywhere in the 5 x 5 grid to win. The game is a 'cascade' model which means the icons fall separately and winning combinations disappear, although in this case they aren't replaced by new symbols which may help as if you clear the grid not only do you expose 'BONUS' superimposed behind any one row of tiles but an award of 500x bet is given! Winning symbols disappear and thus this rearranges the remaining ones as they fall and hopefully form more winning connections.

The Wilds pay best at 150x bet for a 5-symbol block, then the red, green and purple characters at 50, 20 and 8x bet for 5. The remaining 7 icons are spell books, potions, runes and shields etc. paying from 5 down to 1x stake for the maximum 5.

There is a Wild Gold Shield symbol 'which always replaces the middle symbol in a winning three-symbol combination to give you a better chance of creating additional winning combinations when symbols drop' according to the rules. So the mathematics of the grid seems to be in our favour. The last special symbol is the Super Power icon and when this lands it lights up one of ten sections yellow in a blue dial on the right of the grid. This will spin and the more positions lit yellow increase the chance of the pointer landing there and awarding one of 4 special benefits on a free respin of the grid:

Five of Fortune - respin with any wins paid at 5x multiplier.

Emblem of Endurance - on the respin, 2 'enduring' Wilds land on the grid and remain there unless you hit a combination comprised of only wilds.

Mark of Multitude - during the respin extra Wilds are created in the centre of winning combinations, 1 appears for a 3-symbol combination between the outside symbols and 2 appear from 4-symbol wins and 3 Wilds from 5-symbol wins.

Scatter of Success - all symbols become scatter pays with the same awards as usual.

As said above, if you clear the word 'BONUS' which is hidden on one row behind the icons. you are awarded the game's free spins. Oddly, these take place on a basic 3-reel slot and you are randomly given 5-20. To beat the monster on each of five levels you need to land a certain number of winning combinations. This number rises for each stage. If you get 3 weapon icons on the win-line the monster is defeated instantly and you move on anyway in a display of spectacular action animations with the reward of 3 extra spins.

The win awards for the slot are multiplied by the number of the stage you are on and if you defeat the final monster number 5 you get a 100x stake special prize plus 2x stake for every spin not used.

Cloud Quest slot has had some serious work put into its creation and the animations and graphics along with sound effects are second-to-none. The features are imaginative and as well as 500x bet for a grid clearance you can win up to 2,800x bet via the respin features. The base game volatility is low to medium and the RTP a generous 96.52% too. Some players may not like cascade or grid slots but this is definitely one for the Gemix fans. Time to get my head up in the clouds...