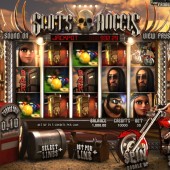 On TV, Sons of Anarchy is one of the most popular shows right now, a typically well-made drama from the US following the travails of a gang of Californian Hell’s Angels.

Sadly, nothing to do with heavenly creatures lavishing winnings on slots fans (and that would certainly have been pretty impressive looking in the hands of Betsoft Gaming) this game from the leading 3D developer sees you amidst a gang of tough bikers who look like they’ve been taken straight out of Anarchy.

With betting starting at just $0.02 in this 5 reel, 30 pay-line slot from the leading 3D game developer, the key feature here is the re-spin.

Activated after each win on the reels, the middle reel will re-spin, and a multiplier displayed at the top of the screen will move up one level. (There are four levels: 1x, 2x, 3x, and 5x.)

Even in the base game, then, big wins can be had, and we haven’t even got to the bonus rounds.

On the reels, of course, there are plenty of symbols in keeping with the theme: two hirsute bikers, the ubiquitous blonde girlfriend, the Bar, bikes, skull money clip and a pool table. Look out for the bottle, as three or more across the reels triggers the free spins round.

During the bonus round, the center reel turns Wild and the biker gang will race on-screen on their Harleys to cheer you on as you spin, and crack a few heads to boot.

Get three or more Lead Biker symbols, however, and you’ll experience the thrill of a bike race. Choose one of the three bikers and earn cash as he progresses along the course. If he wins, you win big!

Pick a Dartboard to Reveal a Cash Prize

Bikes and video slots have some previous, of course. Evel Knievel, NextGen Gaming’s ‘70s-themed slot based on the hero stuntman, is great fun and has a cracking bonus arcade game to boot, while iSoftBet’s comic take on the biker, Motorbike Monkey, is a fun slot for any Harley Davidson fans out there in slots land.