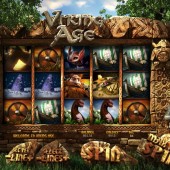 When it comes to portraying the Vikings - the pillaging hoards from Scandinavia who took over countries at will - slots developers know exactly what they want: beards, buxom beauties, and big bonuses.

Luckily, Viking Age from one of those clever slots developers Betsoft Gaming has all three in spades.

We've been here before, of course, with Viaden Gaming's Viking Conquest - a Norse-flavored slot with lots of plait-haired blondes and beardy brick shithouses - and the simpler charms of Viking's Treasure by NetEnt, but Betsoft's slot takes the contest hands-down.

Definitely one from the Betsoft 'we've put some effort into this one' camp rather than the developer's stable of simpler old-school style slots, Viking Age is full of slick animation, pretty 3D graphics and authentic music & FX. A 5 reel, 30 pay-line game, we get the predictable cavalcade of Viking paraphernalia on the reels like axes, shields, shields, longships, gold helmets, runestones, plus Amma, the warrior princess, and the two Viking warlords themselves.

Pick a Prize in the Runestone Doors Bonus

There are no Wilds in Viking Age, but there are several Scatters that trigger various bonus games. First up is the Viking helmet.

Three or more of those on the reels triggers the Runestone Doors feature, effectively a 'Pick the Box' type game where our heroine Amma gets to choose from a selection of symbols to reveal bonus wins or free spins.

Find the Vikings to Multiply Your Free Spins

Amma herself - while also standing alluringly to the side of the reels whopping whenever you bag a winning combo - acts as a Scatter.

Three or more Ammas triggers free spins. However, during the freebies, look out for her two bearded Viking chums, as they reveal multipliers to the side of the reels.

Arm Wrestle Your Way to a Win

Finally, look out for the Arm Wrestling symbols. Hitting those on the reels triggers the last bonus game where our two Norse knuckleheads go arm-to-arm in a battle over the pub table. Choose the winner correctly and you'll win a cash prize.

Betsoft know how to spoil their customers, and fans of great 3D action will certainly warm to this slot. Take a step back in time and call up the great Norse gods of luck!